‘My mother was like a steel fist in a velvet glove’: the real Audrey Hepburn 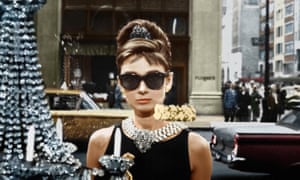 “Very alert, very smart, very talented, very ambitious.” That was the director William Wyler’s verdict after watching a screen test for Roman Holiday by a young chorus girl called Audrey Hepburn in 1951. She got the part, won an Oscar and the rest is history. For decades, Hepburn has been adored for her graceful beauty and style. But somehow, the “smart”, “talented” and “ambitious” woman Wyler described never makes it into the books about her enduring charm with titles such as How to Be Lovely: The Audrey Hepburn Way. Now a new documentary, Audrey, gives us a more complex picture of the woman.

Directed by Helena Coan, the film features never-before-seen archive footage of Hepburn alongside intimate interviews with her family and friends. Speaking on Zoom from his home in Italy, Hepburn’s eldest son, Sean Hepburn Ferrer, says his mother’s steeliness is often overlooked. “She was no pushover. You have to fight in Hollywood for every little bit, and she did. But she played the part of the ingenue. And that’s who she was, too. None of us are just one way or another.”

Hepburn was born in Belgium in 1929, the daughter of Baroness Ella van Heemstra, a minor Dutch aristocrat, and Joseph Ruston, an Englishman who mostly absented himself from family life. He finally walked for good in 1935, moving back to England, a moment Hepburn describes in the film as “the first big blow of my life. My father leaving left me insecure for life.” Ruston barely managed a visit when his daughter was sent to boarding school in Kent.

Ruston and Van Heemstra were both Nazi sympathisers and he was a friend of the English fascist Oswald Mosley. Did Hepburn feel ashamed about their politics? “More than ashamed, she was angry,” Ferrer says. “My mother absolutely loathed it.” There is no evidence for the story that Hepburn’s parents lunched with Hitler, however: “That’s a how-to-sell-10,000-more-books Hollywood rumour.” 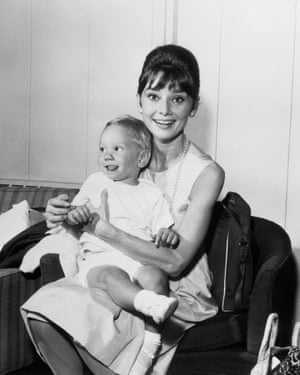 Hepburn with her son Sean not long after filming Breakfast at Tiffany’s. Photograph: Bettmann/Bettmann Archive

Hepburn spent the second world war with her mother in the Netherlands under Nazi occupation. Her uncle was among the Dutchmen rounded up and shot. She saw Jewish women and children loaded into wagons. “It haunted her for the rest of her life,” says Ferrer. Van Heemstra had by this time renounced fascism and worked with the resistance in the Netherlands. Like many Dutch children, Hepburn did her bit, too, carrying messages hidden in her shoes, says Ferrer, who has written a biography of his mother and recently published a book for children about her life in wartime, co-authored with his wife Karin. “To protect her, I’m not sure she was told to what extent the messages were important,” says Ferrer. “She knew they were important. But having heard the stories, and I don’t know this for a fact, I’m sure she was sheltered from the contents of those letters.”

In the freezing winter of 1944, the Germans left the Dutch to starve. Hepburn went for days without food and the family ate tulip bulbs to survive. “She used to tell me: ‘We spent days in bed with all our clothes on because blankets were not enough.” As an adult, Hepburn was so thin people often assumed that she had an eating disorder – she weighed 48kg (7st 7lb) all her life. Ferrer laughs off the suggestion she was anorexic. “She could eat everyone in our family under the table, and she was a wonderful cook. If she had an eating disorder, I never knew about it.” He adds that her wartime experiences left Hepburn with an armour-plated resilience. “It gave her a steely determination, a respect for what it takes to do it. I’ve heard her described as a steel fist in a velvet glove.”

Did it make her fearless? “No. She experienced fear all her life. I remember her giving speeches for Unicef, standing behind a podium, shaking like a leaf.” In her later years, Hepburn worked practically full-time for the UN children’s agency, founded in 1946 to help children facing hunger and disease in Europe. Hepburn made four or five trips a year, on the road for weeks at a time, always on top of her brief. In the footage, what you see is her genuine warmth for children – she seems constitutionally unable to pass a baby without stopping for a kiss or pat.

After the war Hepburn moved to London with her mother. By all accounts the aristocratic Van Heemstra was emotionally cold and critical, yet she scrubbed floors in a hotel to put her daughter through ballet school. However, after missing vital years of training during the war, Hepburn lacked the technique to become a prima ballerina. She started acting to make some money and was discovered at the age of 22 by the French writer Colette on the French Riviera. Colette took one look at Hepburn and decided she would be perfect to star in the Broadway play of her novella Gigi – never mind that Hepburn had at that point only spoken a few lines as an actor. Next came Roman Holiday and overnight stardom. “I didn’t know what hit me,” she recalls in the documentary. 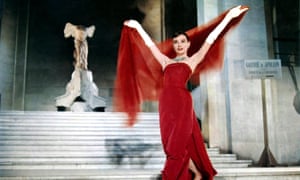 Early in her career, producers cast male actors old enough to be her father as love interests (and paid her a fraction of their paychecks). Bogart was 54 in Sabrina; Hepburn was 24. Fred Astaire was 56 in Funny Face; she was 26. These films were the beginning perhaps of the image of Hepburn as fragile, in need of protection. But the real woman was tougher, says Ferrer. “Think about it. She was the first woman – with Elizabeth Taylor – to make a million dollars, at a time when women couldn’t open a bank account without their husbands. She could fight her corner. That was thanks to the war, the ballet, her mother.”

The film is packed with anecdotes of Hepburn fighting her corner. She tussled with her great friend, the fashion designer Hubert de Givenchy, over his costumes for her characters; she simplified the famous little black dress he made for Breakfast at Tiffany’s. When an exec dismissively announced that her song for the movie, Moon River, was for the chop, Hepburn exclaimed: “Over my dead body!”

Hepburn will never be forgotten so long as Breakfast at Tiffany’s is around. Truman Capote, who wrote the novella, thought Hepburn was miscast; he wanted Marilyn Monroe for the part. (His final verdict on the film: “It made me want to throw up.”)

What is it about Breakfast at Tiffany’s that makes it so enduring? Ferrer takes a few moments to answer. “I think there is an extraordinary quality to all her films; they have not aged. I read an article some years back in which Emma Thompson demeaned my mother’s acting ability. My mother would be the first person to say that she wasn’t the best actress in the world. But she was a movie star.” 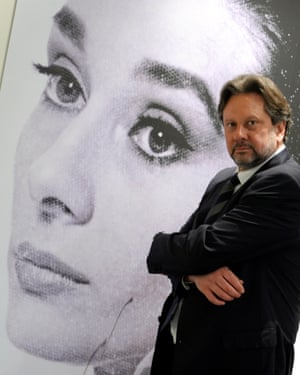 Sean at an exhibition about his mother in Berlin, 2009. Photograph: Rainer Jensen/EPA

If Hepburn was in control of her brand, her personal life was another matter – her “achilles heel”, says Ferrer. In his biography, he wrote that the best-kept secret about his mother was her sadness. After spending her childhood trying to earn her father’s love, she tried to find it in her relationships with men. “You become very insecure about affection and terribly grateful for it and you have an enormous desire to give it,” she explains in the film.

Hepburn was married twice. Ferrer’s father was her first husband, the actor Mel Ferrer, whom she married in 1954. Hepburn had one miscarriage before Ferrer was born in 1960. He describes his father as a “difficult and demanding man” and the couple divorced. In 1969, she married an Italian psychiatrist, Andrea Dotti, moved to Rome and had another son, Luca. The marriage was not happy – in the documentary, a friend reveals that Italian paparazzi photographed Dotti with more than 200 different women. After another divorce, Hepburn lived with the Dutch actor Robert Wolders until her death from cancer in 1993, aged just 63.

Family was important to Hepburn, who seems to have had a great gift of knowing what she needed emotionally. She always wanted to be a mother, she said: “Ever since I was a child, I loved babies.” After Ferrer was born, she more or less quit acting, turning her back on Hollywood for 10 years, writing polite thank-you-but-no-thank-you letters to directors including Stanley Kubrick. Having been denied affection as a child, she poured it into her children. She explains her decision in the film with a sisterly acknowledgment that her choice is not every woman’s choice: “I don’t want to be made to sound virtuous. It was a very knowing and, if you like, selfish decision. It was what made me happy, to stay at home with my children. It wasn’t a sacrifice because I felt I wanted to stay home.”

Unlike his mother, Ferrer had a happy childhood in Switzerland then Rome. “I didn’t grow up in Hollywood, the place, or the state of mind. We didn’t have screening rooms at home. I grew up in the countryside as a normal kid. I can see how movie stars lose touch with reality. I can understand that, because you’re told a million times a day in so many little gestures that you’re some how special and unique. My mother didn’t take herself seriously. She used to say I take what I do seriously, but I don’t take myself seriously.”

Audrey is released on DVD and digitally on 30 November; Little Audrey’s Daydream is out now