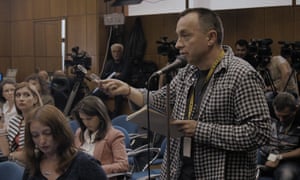 For years, actually for decades, Romanian directors have been warning us about top-to-bottom official corruption in their homeland – an insidious malaise undermining the state and infecting the soul. Cristi Puiu’s The Death Of Mr Lazarescu (2005) is about an old man’s final hours turned into an ordeal by hospital inefficiency and insensitivity; Cristian Mungiu’s Graduation (2016) is about a doctor who calls in favours to fix his daughter’s exam results and Corneliu Porumboiu’s Police, Adjective (2009) was about the bizarre bureaucratic slowness of a police station. Now documentary film-maker Alexander Nanau has arrived with something to show that this wasn’t just mannerism or metaphor. It’s based on sickening fact.

Collective is about what happened after a horrendous fire at Bucharest’s Colectiv nightclub in 2015 which killed 64 people. It wasn’t simply official laxity about inspecting fire exits and building materials: the majority died later, not of their injuries, but of hospital infections. A heroically tough investigation led by Cătălin Tolontan, a reporter at a sports paper, Gazeta Sporturilor, showed that the disinfectant supplied to state hospitals was useless due to being secretly diluted. It is at this stage in the film you might be thinking about Harry Lime and his penicillin racket in The Third Man. The resulting surplus of taxpayers’ money lined the pockets of certain individuals in what can only be called Romania’s pharma-government complex. Tolontan discovered it was just part of Romania’s widespread corruption and gangsterism.

The film shows a parade of nauseatingly bland government ministers attempting to brush off questions from Tolontan and others. Eventually a new broom at the health ministry, one Vlad Voiculescu (a former patients’ rights campaigner) is at least more sympathetic. “How the hell can all this be solved?” he gasps at one stage, confronted by more evidence from a hospital whistleblower. How indeed? Campaigners were hoping that after the year-long emergency national government brought in after the Colectiv scandal, there would be a new generation of politicians committed to rooting out abuse. But it appears Tolontan’s campaign goes on.

The cynicism and indifference to suffering is truly horrible, and a kind of insidious evil rises from the screen like carbon monoxide, and also a terrible sadness.

There is a moment when I felt like hiding under my seat: when Tolontan and his colleagues are shown a secretly filmed video of maggots wriggling in a patient’s incompetently dressed wound. If that was in a fictional film, the metaphor would be dismissed as too obvious. Finally, Tolontan and his team are shown discussing sinister communications they have had from the intelligence services, telling them to be careful, for their families’ sake.

The title itself has unbearably ironic echoes. Partly, Collective is about the grisly authoritarian habits that have survived the fall of Ceausescu in Romania; partly it’s about the big money to be made, Moscow-style, in exploiting national assets. It’s also a warning to us here about how mouth-wateringly lucrative a state health system is to a certain kind of well-connected entrepreneur whose impulse is to save money and make a profit.

• Collective is available on digital platforms from 20 November.