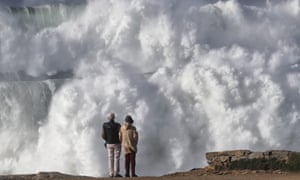 ‘The biblical flood has been updated: Nature’s judgement rather than God’s is being handed down.’
Photograph: Lavandeira jr/EPA

Faith – having it, losing it, changing it – is at the heart of Carys Bray’s third novel. For Chris Abram, being brought up in a religious family resembles an interminable car journey: “his father in the driver’s seat, his mother beside him, and Chris and Ruth in the back, belted in and unable to get out … There was no point in asking ‘Are we nearly there yet?’ They were always nearly there.”

As an adult Chris swapped one worldview for another, but it’s equally eschatological. An out-of-work landscape gardener, he stands on the high street holding up signs warning of ecological collapse to the unmoved inhabitants of a seaside town in the northwest of England. The biblical flood has been updated, Nature’s judgment rather than God’s is being handed down, and Chris is determined to be among the saved. It is left to his wife Emma to take up the household burden. Their two sons, Dylan and James, are passing through the self-defining phase of adolescence that entails rejecting their mother with unkind jibes. No wonder Emma feels bogged down.

Evidently written to address the climate crisis, the novel takes on a new significance with Chris’s paranoid stockpiling of food in the garage. Emma is not unsympathetic to his fears of societal collapse; it’s just that with Christmas round the corner, she’s working to a different timescale. To add to her burden, her self-righteous mother-in-law Janet descends for the holiday period. Here Bray’s satire shines with observation and subtlety. Janet is the sort of martyr-like houseguest who causes more disruption than an apparently self-centred visitor ever could. The sink full of soaking knickers because she doesn’t want to trouble Emma by using the washing machine is a particular gripe.

With sharp wit, Bray teases out the tiny domestic dramas, identifying the pinch points that can make the most solid relationships briefly or permanently unendurable. Emma’s dead Christmas tree and its improvised replacement – a stepladder covered in fairylights – symbolise her dogged willingness to keep the family traditions alive in the face of indifference and chaos. Bray shows how the most well-regulated household – and the Abrams’ is hardly that – can still tremble on the brink of collapse. What message could be more timely than that?

• When the Lights Go Out is published by Hutchinson (£14.99). To order a copy go to guardianbookshop.com. Delivery charges may apply.