‘He’ll make your head explode’: sax stars on the genius and tragedy of Charlie Parker 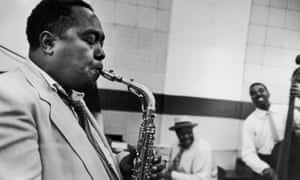 Parker … died at the age of 34, crippled by heroin addiction.
Photograph: Hulton Getty

Outside jazz circles, Charlie Parker might not be a household name like Miles Davis or Louis Armstrong, but the saxophonist, who died of cirrhosis aged 34 after struggling with addictions to heroin and alcohol, was one of music’s true innovators. By inventing the dizzyingly fast style known as bebop, Parker turned jazz from dance music into something intensely intellectual and spiritual. As the London jazz festival celebrates his centenary with a tribute, today’s jazz stars talk about the shattering impact of the man nicknamed Bird.

Femi Kuti: ‘At first we thought it was rubbish’ 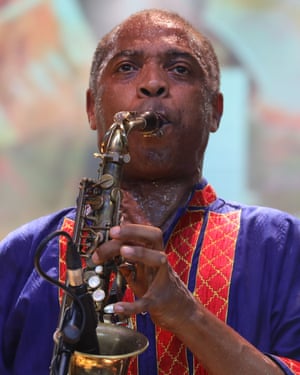 As a boy, Charlie Parker was my idol. When I first heard his music, I didn’t like it at all. We were listening to funk, and we thought it was rubbish. But my father [Fela Kuti] kept telling me, if I wanted to be a musician and a composer, I’d better start to appreciate jazz. When I went back to Charlie Parker, I said, “Wow!” After that, I started looking for my own voice as a saxophonist. I got to a point where I was like, “Well, I can never be Charlie Parker, I know I can never be my father, so I better start being Femi Kuti.”

There are many stories about Charlie Parker’s life that I find moving: how people used to make fun of him before he could play, how he got great and teamed up with [trumpeter] Dizzy Gillespie, how he got the nickname Bird because he sounded like a bird. Of course, the drug abuse was heartbreaking. He died so young. He had problems with his recording company, so he changed to the tenor sax so he could disguise himself, do some recordings and make some money. Life is full of turbulence. I’ve had terrible recording contracts, too, but I think once you are true to the spiritual aspect of music, it will always work out at the end.

Standout release: I remember listening to [Parker’s 1946 composition with Benny Harris on trumpet] Ornithology and thinking, “Whoa, are these people humans?” I couldn’t believe humans could play the musical instrument that well. 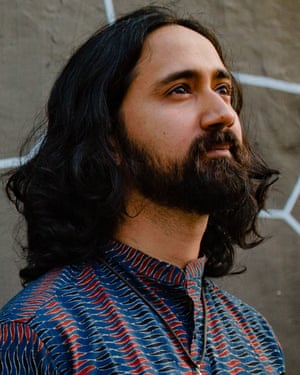 I was 13 or 14 when I picked up a Charlie Parker compilation at a music store in Chennai. They had everything from Muddy Waters to Kenny G, and I didn’t have any references for what was good or bad; it was just a question of figuring it out myself. This one had the hits on it, like Yardbird Suit and Night in Tunisia, Donna Lee. It said “Bird” on the cover, which attracted me, and it had a blue sleeve with an image of him towering over the rest of the band. It was the first jazz that I’d heard that was at that fast tempo; it was really exciting. I had no understanding of what bebop was, but he still sounded like a maverick.

Everyone in jazz knows that he is the guy who broke all the rules. He took jazz away from big bands and swing. He was like: if you want to listen to my music, sit down and listen to it because this is serious shit happening here, which is what we consider jazz to be now today. He was influential on everyone from Miles Davis and John Coltrane through to rap music.

Standout release: For me, it’s all rhythmic. The intro of Ko-Ko lasted for about 30 seconds. I thought, Oh, that sounds sick, that’s amazing drumming – and so fast!

Shirley Tetteh: ‘He and Max Roach jabbed like boxers’ 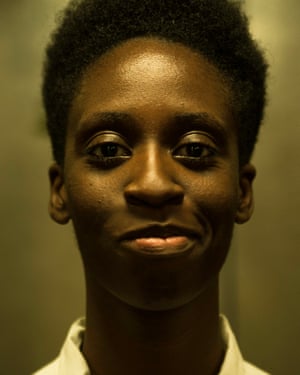 When I first got into jazz, I didn’t understand Charlie Parker. But I found my way to appreciating him through all the musicians that I loved: Nathaniel Facey, the M-Base collective, Logan Richardson. I’m awed by what he managed to do with his instrument – in particular, the relationship between Parker and [drummer] Max Roach and how they played with each other, like boxers jabbing. They were punctuating each other in a way that was incredibly masterful.

He achieved so much that there’s almost no point in trying to compare yourself, otherwise you stop yourself from playing. It’s much more useful to keep the light and love and life of the music, and follow that and see where that takes you, as opposed to thinking, “I’ve got to achieve what Charlie Parker achieved.”

Standout release: It’s not many people’s favourite: a recording of Body and Soul from 1941 or 1942. It’s reported to be a personal recording of him, guitarist Efferge Ware and drummer Little Phil Phillips in the studio. It was simple enough for me to figure out how he was improvising, as opposed to just playing stock phrases. It’s kind of a sentimental reason – but melodically, it’s beautiful.

• Shirley Tetteh performs as part of the London jazz festival’s tribute to Charlie Parker, Church of Sound, on 20 November and streaming online via efglondonjazzfestival.org.uk.

Gary Bartz: ‘He opened me up to the universe’ 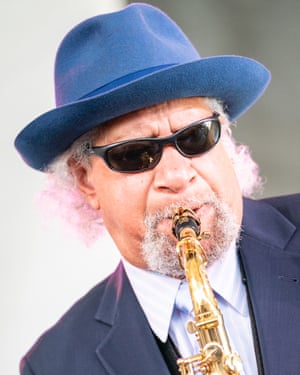 Charlie Parker gave me a reason to live. I really mean it. When I first heard his music, I was six years old at my grandmother’s house, and my uncle had the records. I would say it was a spiritual awakening. His music opened me up to the universe.

Growing up, the music in my house was mostly music from my community: blues. But I heard that Charlie Parker loved Stravinsky, so I started studying Stravinsky. He was one of the most influential musicians – not just jazz musicians – of all time. The thread started back with Bach, up through Mozart, through Beethoven, to Duke Ellington to Louis Armstrong. Max Roach would come to blows with people for calling him a jazz musician. It’s an insult. It’s like calling us the N-word.

When I was studying Charlie Parker and wondering how he got there, I found out how much he practised. There’s no other way to become a virtuoso. For three and a half years, Charlie Parker was in his mother’s house [practising for] 10 to 15 hours a day. When I lived in Los Angeles and I was around the Jackson Five, these guys would work eight hours every day, that’s why they were so good. You just don’t go out and play. We learn how to be musicians in the house. You don’t learn on the bandstand. On the bandstand, you bring the knowledge that you’ve gained working in the house. I say, after the pandemic, you should sound better than you did before the pandemic.

Standout release: My favourite of his albums is Charlie Parker With Strings. Now Miles Davis, who was taught by Charlie Parker, didn’t like that album. He felt that it was tame, that it didn’t show the power and the glory of Charlie Parker. He felt like the strings tied him down. But I like the way he approached it.

Shabaka Hutchings: ‘His music is like instruction to me’ 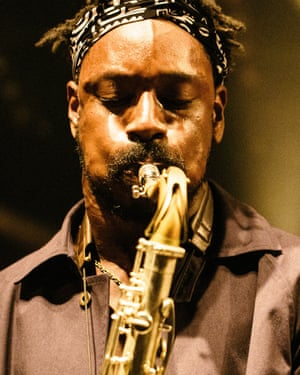 I can definitely relate to Charlie Parker practising for hours and hours every day. I’ve been waking up at five in the morning and getting on it for the stamina and technical proficiency I need on clarinet. Parker’s music isn’t sentimental music to me, it’s like instruction. Every time I listen to his music, I hear stuff that relates to where I’m at. With river-deep artists like Parker, you can listen to him at one stage in your life and hear one surface level, but the more you listen to him, you discover more and more about what made him a genius.

There’s one book in particular I’ve got by my bedside called Bird: The Legend of Charlie Parker, edited by Robert Reisner. It’s a series of interviews with everyone around his life: his mother, girlfriends, managers, core musicians. It really made me appreciate the fact that he was a complex character who articulated this complexity within music. I find it inspiring that he listened to everything – he was just really enthusiastic about gathering knowledge.

There is a quote that I remember that stuck out to me in his seminal interview with Paul Desmond, where he says: “You’re playing for an audience.” I’ve thought about that a lot. When an artist plays, it’s not just the artist playing out into the ether and the music has a life by itself, the audience participation is a part of the artistic process. And Charlie Parker says that clearly.

Standout release: It’s a live recording from 1953, Live at the Open Door. I find that the studio recordings [of his music] are kind of small versions of what he is. It’s when you hear the live recordings that you start appreciating him more. This is a really great example of how Parker’s vocabulary relates to modern, forward-looking saxophone. If you listen deeply, it will make your head explode.

Tia Fuller: ‘I was like, man, this is what it is to be a master’ 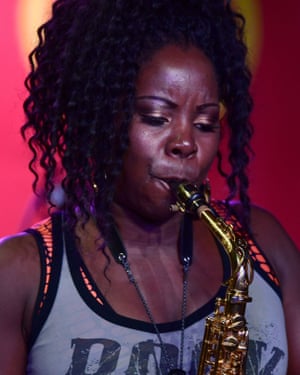 I was part of the Charlie Parker Symposium last year and there was one story that really stuck out. He was struggling with heroin and had just come out of jail. Savoy Records required him to go back in the studio. He felt like that recording was so horrible, he’d been forced to do it. I listened to the recording, and his level of excellence, even at his lowest point, was higher than everybody else. I was like, man, this is what it is to be a master. He is bird, he did soar in his music, even when he wasn’t really soaring in his life. To me, that was really transformational, that’s what I need to strive to be not only as a musician, but as a human being. Even when we don’t feel like it, we still have to show up.

I was on tour with Beyoncé between 2006 and 2010 and I took it upon myself to hip her to as much jazz as I possibly could. For her birthday, I gave her a Sarah Vaughan album, a Nancy Wilson album. But then I did introduce her to Charlie Parker. We were preparing for a live rendition in Las Vegas and she wanted something acoustic to play. And at the time, Deja Vu was her single and I was like, “What jazz song is in this key? How High the Moon?” So then I was like, “Beyoncé, have you ever listened to Ella Fitzgerald scatting [the tune of Charlie Parker’s] Ornithology over How High the Moon?” She had never scatted before, and it was like “Googoo, gaga”; she was using all the wrong syllables. But I tell you, she came back the next day and she had that down pat.

Standout release: Charlie Parker With Strings. There’s something about the intermingling of alto and strings.