A Promised Land by Barack Obama review – memoir of a president 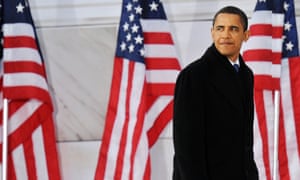 Barack Obama walks to deliver a speech at his inauguration celebrations, at the Lincoln Memorial in Washington in 2009.
Photograph: Jewel Samad/AFP/Getty Images

To read Barack Obama’s autobiography in the last, snarling days of Donald Trump is to stare into an abyss between two opposite ends of humanity, and wonder once again at how the same country came to choose two such disparate men.

Somewhere at the top of a long list of contrasts is their grasp of language and facts. On the eve of the book’s publication, Trump has been emitting staccato tweets about winning an election he has decisively lost, a claim formally labelled within 10 minutes as disinformation. At the other end of the scale, Obama’s A Promised Land is 701 pages of elegantly written narrative, contemplation and introspection, in which he frequently burrows down into his own motivations.

Obama makes clear he believes the whiplash from the 44th to 45th president is no accident. On the contrary, the mere fact that an accomplished, intelligent, scandal-free black man inhabited the White House was enough to trigger his antithesis.

It is not the theme of the book by any means, but beneath the chronology of the Obama years, the inherited economic crisis, the fight over affordable healthcare and the rethinking of the US’s place in the world, racist resentment lurks below, and its orange embodiment rises into sharper focus with each chapter.

In the preface, Obama says he set out to tell the story of his presidency in 500 pages and finish within a year. But an additional three years and 200 pages later, he has managed only some of the journey.

A Promised Land takes us from childhood to the May 2011 killing of Osama bin Laden, delving into certain events and decisions with a degree of detail that may lead some readers to wonder if there might be a sweet spot between Trump’s presidency by blurt and Obama’s earnest prolixity, between total denial of mistakes and the protracted re-examination of each one. (A second volume is in the works, delivery date uncertain.) 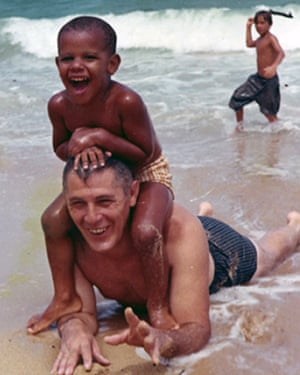 Obama as a child, pictured with his grandfather, Stanley Armour Dunham, in the 1960s. Photograph: Anonymous/Associated Press

The Obama childhood is familiar territory by now (this is his third autobiographical work) and this time he says little about his four formative years in Indonesia, taking up the story on his return to Hawaii to live with his maternal grandparents. There are interesting reflections on the pivot point from easygoing teenage Barry, preoccupied with basketball and girls, to the serious man of destiny – a transformation the former president says still has his high school friends wondering, “How the hell did that happen?”

The answer in part was an uneasiness in his own skin that itched to the point it could no longer be ignored. Obama described himself as being “from everywhere and nowhere at once, a combination of ill-fitting parts like a platypus or some imaginary beast”.

He finds his cure in books, and pinpoints a Honolulu jumble sale, from which he walks away with a stack of secondhand finds that sparks an addiction. They become his companion, solace and guide, though he admits that, as with almost every undergraduate in history, some of his literary quests had mixed motives: he read Marx and Marcuse so he could talk to the “long-legged socialist” in his dorm, and Foucault and Woolf “for the ethereal bisexual who wore mostly black”. Orders have surely been issued already in newsrooms around the country, for both women to be tracked down.

A Promised Land delivers amply on the basic expectations of political autobiographies, providing a granular view from the driving seat of power. It describes, for example, the effort involved in fighting off jet lag while maintaining an air of interest in the speeches of other leaders at international summits, while surreptitiously using the occasion to get paperwork done.

There are also the gratifying details observed in moments of historic import, like the failure of the White House’s hi-tech, super-secure communication system when Obama is on a trip to Brazil as the moment comes to order his first military intervention in Libya. In the end, the president makes do with a regular cell phone “probably also been used to order pizza” to deliver a cryptic command to a general back in Washington.

Two months later, when it comes to ordering the raid on Bin Laden in Pakistan, the president makes the final decision alone in the Treaty Room at the White House, with a basketball game on in the background. The book has already made news by confirming that Joe Biden advised against the raid, a fact that would undoubtedly have hurt the president-elect if publication had been a few weeks earlier, but now offers some assurance of Biden’s relatively sober approach to wielding US military power.

Obama provides intriguing, though frustratingly restrained, sketches of his fellow leaders. David Cameron is urbane and confident, though imbued with “the easy confidence of someone who’d never been pressed too hard by life”. Vladimir Putin is compared to a party boss from the dark age of Chicago machine politics, “except with nukes and a UN security council veto”. Putin’s more pliant protege, Dmitry Medvedev, is a fan of Deep Purple, and betrays a “certain ironic detachment in his delivery, as if he wanted me to know that he didn’t really believe everything he was saying”. 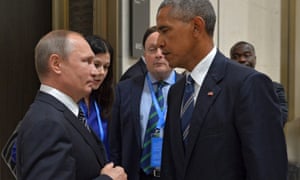 Back home, the decisive moment in Obama’s first term comes in 2010, when his aspirations are hobbled by the Republican capture of the House of Representatives in disastrous midterm elections. It is not just the defeat that takes him by surprise, but the extremes to which GOP leaders are prepared to go, threatening to trigger the first ever US debt default to block his legislation. Obama senses something much uglier than politics as usual, describing “an emotional, almost visceral reaction to my presidency, distinct from any differences in policy or ideology”.

“It was as if my very presence in the White House had triggered, as deep-seated panic, a sense that the natural order had been disrupted,” he recalls.

He was only vaguely aware of Trump’s existence in 2010, when the property developer and reality show host called an aide offering to fix the Deepwater Horizon oil spill. On learning the well had been capped, Trump switched gears and – archly noting that Obama had hosted a state dinner in a tent – suggested he would be willing to build “a beautiful ballroom” on White House grounds. The offer was politely declined.

When Trump begins his presidential run five years later, he rips off any remaining veil from the racism underlying Republican obstructionism, building his campaign on the promotion of the “birther” fantasy that the president was not US born, but an infiltrator run by Islamic extremists. Obama is not surprised that Trump’s antics won coverage on Fox News, but is clearly still angry that the insurgent was given endless air time on ABC, NBC and CNN. The respectable press treated the racial slurs with “polite incredulity” but, Obama adds, “at no point did they simply and forthrightly call Trump out for lying or state that the conspiracy theory he was promoting was racist”.

Such blunt truths were not adopted by mainstream media until late in Trump’s presidency – an unearned deference that arguably help lay the nation’s defences bare in the face of the looming threat.