Has Ted Lasso doomed American managers to yet more mockery? 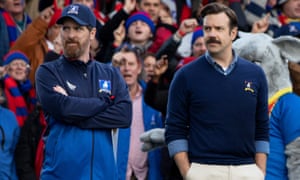 The joke is a familiar one. A tired one. “AFC Richmond is gonna give you everything we got, win or lose,” the fictional, American soccer caricature Ted Lasso explains in the first episode of the Apple TV+ series of the same name, at which point he is reminded by a reporter that this is a sport with draws. “Right, y’all do ties here,” he responds, the punchline presumably being Americans know nothing about the sport.

There are countless moments like this throughout the show based on a character first portrayed by Jason Sudeikis in a series of promos for NBC Sports’ Premier League coverage. The notion of American ignorance towards soccer is the comedic crux of the whole thing. It’s what draws the majority of the laughs.

Audiences have lapped it up, and Ted Lasso has helped put Apple TV+ on the map in the streaming wars with a second and third season already ordered. It is a show with more heart than is apparent in the synopsis. There is at least a depth beyond than the cheap, easy jokes. Many American soccer fans consider it a favourite.

But what does it say about the reputation of American soccer figures, coaches in particular, that the caricature of Ted Lasso still exists in 2020? Will English and European soccer always view managers from across the pond as out of their depth jocks in khaki pants? Are American coaches doomed to always be seen as Lassos?

Jesse Marsch: ‘At Salzburg, I’m not treated like an American coach’

It’s impossible to watch Ted Lasso and not think of Bob Bradley. When to took over at Swansea City in October 2016, he became the first American to manage a Premier League club. Of course, Bradley’s time in south Wales was a disaster. He lasted just 11 games, making his tenure the shortest in Premier League history. There was more than enough in Bradley’s dismal results and performances to cross-examine him on, yet so many of the questions posed of the American concerned the way he talked. His use of terms like “PK” and “road game.”

Long after Bradley’s exit from Swansea City, Sky Sports’ irreverent Saturday morning show Soccer AM continued a segment called ‘Brad Bobley’s Soccer Camp,’ in which the jokes are largely the same as the ones played for laughs in Ted Lasso, albeit to an even more outrageous extent.

Bradley achieved a level of success in European club and international football before pitching up in the Premier League. He has coached at a World Cup, taking a team to the last 16 after a group stage draw with England. That still wasn’t enough to spare him the stereotypes and the ridicule.

One American coach in Europe who certainly isn’t a Ted Lasso is Jesse Marsch. He’s the modern-minded boss of Red Bull Salzburg, the Austrian club that has earned itself a reputation as one of the best run small clubs in Europe. A video of Marsch speaking to his players in German during half time of a game against Liverpool in the Champions League went viral last season. His vocabulary was slightly broken and interspersed with English, but the trust Marsch’s players have in him could be seen in their obvious engagement. And in their second-half performance, which saw Salzburg score twice more in a narrow 4-3 defeat.

Marsch has recently spoken about how American soccer figures are seen in Europe. “For the American player over there, and certainly the American coach because it’s such a new theme, we’re very undervalued and under-respected,” the former New York Red Bulls boss told the Coaches Clubhouse podcast. “But that’s almost an area that Americans can thrive in, this idea that we can be the best, and it doesn’t matter what anyone says and we’re going to work as hard as we can because our self-belief and our grit is so strong.”

At least the United States has the likes of Christian Pulisic to brush away the outdated cliches on the pitch. In fact, the US men’s team currently boasts a contingent of exciting young players at some of Europe’s biggest clubs, with Sergino Dest and Konrad de la Fuente at Barcelona, Weston McKennie at Juventus, Tyler Adams at RB Leipzig, Gio Reyna at Borussia Dortmund, Zack Steffen at Manchester City, Chris Richards at Bayern Munich and Yunus Musah at Valencia on top of, of course, Pulisic at Chelsea. At this point, it could even be said American players are fashionable.

As the Pulisic of American soccer coaching, there is a lot on Marsch to ensure he and his peers aren’t seen as Ted Lassos, or Brad Bobleys, forever. Red Bull has given him the wings to go from New York to Austria. And he could potentially head back to RB Leipzig, where he had a spell as assistant manager for a season. Marsch in charge of one of Europe’s most exciting, forward-thinking clubs would force many to change their perceptions of American managers.

You have to go a long way down the European pyramid to find more American coaches making an impression. There’s Joe Enochs in charge of FSV Zwickau in the German third division and Mike Keeney who now finds himself in the Finnish Veikkausliiga having coached a number of clubs in the country. Brian Clarhaut can be found at Umea FC in the Swedish second division, with Dennis Lukens at Sudnobudivnyk Mykolaiv in the Ukrainian second tier.

By the nature of there being fewer jobs for managers than players American coaches may find they never flood the European market in the same American players have in recent times. There have, for instance, only ever been four German managers in Premier League history and only one Brazilian. By this measure, it doesn’t look so bad that America has only produced two Premier League managers. (Bradley and David Wagner). Nonetheless, American soccer’s greatest battle has always been against perception and Ted Lasso, no matter how bingeable a show it may be, makes this battle that little bit harder.