Jerry Jeff Walker: the ‘outlaw’ songwriter who gave Mr Bojangles to the world 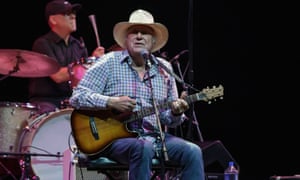 Mr Bojangles become a standard as soon as it was first recorded in 1968. Nina Simone did a beautiful version. Bob Dylan did a dreadful version. Sammy Davis Jr built it into the centrepiece of his live show. Mr Bojangles appealed to cabaret, jazz and folk singers (even Robbie Williams sang it). This tale of a worn-out hoofer who the narrator encounters when both men are locked up in a New Orleans jail has a gentle melancholy and a wistful melody; it is reflective of time passing and hardships experienced. Less well known was its author, Jerry Jeff Walker, who has died in Texas at the age of 78. Walker never became a household name. Some would consider him a one-hit wonder. But to his legions of fans he was a maverick, a musician whose offbeat music and presence ensured their devotion.

Walker lived a thoroughly American life: born Ronald Clyde Crosby in Oneonta, New York, he played in rock’n’roll bands as a teenager then, impressed by Woody Guthrie and Jack Kerouac, lived an itinerant busker’s life hitching around the US. It was during this time that he spent the night in a New Orleans jail. Returning to New York City, he played the Greenwich Village folk clubs (adopting the stage name Jerry Jeff Walker in 1966) and co-founded the folk-rock group Circus Maximus with Bob Bruno. They released two albums that attracted some attention but Walker left the group to concentrate on his solo career. His debut album, 1968’s Mr Bojangles, won good reviews but sold slowly. But other artists started recording the title song: country-rock outfit the Nitty Gritty Dirt Band reached No 9 in the US charts in 1971 with their version.

Around that time Walker relocated to Austin, Texas. He would live there for the rest of his life, becoming almost as beloved by locals as native son Willie Nelson. He was a prolific songwriter and recording artist, releasing 11 albums during the 1970s: his sound was the kind of rough-hewn, country-flavoured folk that would become known as Americana – often inventive, always thoughtful and good-humoured. He was bracketed with the so-called “outlaws” – the marketing movement that enabled Nelson and Waylon Jennings to suddenly sell albums on a scale rarely seen before in country music – and he shared their defiant, liberal-yet-proudly-Texan worldview. Without ever enjoying their huge commercial successes, Walker’s albums sold strongly. He appealed to long-haired country, folk and southern rock fans and his live performances, backed by the Lost Gonzo Band, were legendary. He also recorded the songs of Guy Clark, Townes Van Zandt, Tom Waits, Rodney Crowell and others early on in their careers.

As the music industry changed in the 1980s – the focus now more on selling vast quantities of LPs rather than nurturing artists – MCA ended Walker’s contract. Defiant, he set up his own label, Tried & True Music, and working with his wife, Susan Streit, took control of his career decades before most musicians would be forced to consider doing so: his Tried & True debut, 1985’s cassette-only album Gypsy Songman album, sold 40,000 copies via mail order. His popularity in Texas was such that, for every birthday, Walker would play two concerts – one at Austin’s Paramount theatre, another at Gruene Hall (the last of the old dancehalls) where each year he would be joined on stage by different noted musician friends. The royalties from Mr Bojangles could have allowed Walker to retire but, instead, he purchased land in Belize where he hosted festivals and set up the Tried & True Foundation.

Curiously, the charity started by this Texas-rooted musician forged a strong connection to the UK. After his son Django studied at the Liverpool Institute for Performing Arts and told his father how he was creating music with talented kids from all over the world – and learning their local musical styles – Walker funded scholarships to the university for talented US musicians who couldn’t otherwise afford to attend. The foundation later provided financial support for mental health and addiction recovery services for Austin-area musicians and their families, and staged end-of-life concerts for the terminally ill at their homes known as Swan Songs.

Walker himself died of throat cancer. For a musician who never bothered the Top 40, the tributes were fulsome. Bill Clinton tweeted: “I’ll never forget seeing him at the Armadillo music hall in Austin in 1972, or his performance for my 1992 campaign the night before Election Day. He was a true original, and his music will live on.” Musicians from Jason Isbell and Hiss Golden Messenger to Jimmy Buffet paid tribute, as did Stephen King.

During the 1970s Walker loved a drink and a good time on and offstage. His song Trashy Women celebrated “too much lipstick and too much rouge”; that night in the New Orleans jail was down to public inebriation. “Greased by drugs and alcohol, I was also raising the pursuit of wildness and weirdness to a fine art,” he wrote in his memoir Gypsy Songman. “I didn’t just burn the candle at both ends, I was also finding new ends to light.” Inevitably, he crashed and burned, his wife ensuring a sober Jerry Jeff would, from the 1980s on, take the stage. While his performances may have become less raucous, his outlaw spirit blazed on.

• This article was amended on 28 October 2020 to replace an incorrectly labelled archival photograph with an image of Walker.