Linda Ronstadt: ‘I had to sing those songs or I was going to die’ 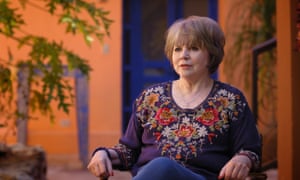 From the start of her career, Linda Ronstadt has talked to the media about her Mexican heritage. “Back in 1967, Tiger Beat magazine asked me what my ambition was for my career,” she recalled. “I said I want to become a really good Mexican singer. But it wasn’t noticed or validated.”

Peter Frampton: ‘I was kept high. If I needed cocaine, he made sure I had it’

Then, in the 1970s, when Ronstadt became a major star, she told Rolling Stone that her biggest influence was the Mexican singer Lola Beltrán. “But they spelled it Laura Del Turone,” she recalled. “They didn’t bother to get her name right because they didn’t think it mattered.”

Even in the late 80s, when Ronstadt made her heritage as obvious as possible by appearing in traditional Mexican garb on the Today Show while promoting an album she had cut of classic songs from that country, Canciones de Mi Padre, the show’s puzzled host, Jane Pauley, asked if her father was “half-Mexican”.

“She was trying to soften the blow of the word Mexican,” the singer recalled. “That’s typical of what happens. Mexican Americans are always made to feel invisible.”

The singer’s lifelong frustration with that situation is one of the main reasons she took part in a poignant new documentary titled Linda and the Mockingbirds. The film illuminates Ronstadt’s near 30-year relationship with Los Cenzontles Cultural Arts Academy, an educational organization in the Bay Area that builds pride in young Mexican Americans by schooling them in the music and dance of their ancestral land. The heart of the film chronicles a 2019 trip Ronstadt financed for Los Cenzontles (an Aztecan term for the Mockingbirds) to travel to the rural town of Banámichi, where her grandfather grew up, to perform with the folkloric dance troupe Grupo Danza Xunutzi. For extra star power, Ronstadt brought along Jackson Browne, another strong supporter of the school.

The new documentary grew out of an earlier one released last year, The Sound of My Voice, which covered Ronstadt’s musical career. The star, who no longer sings due to her 2013 diagnosis of Parkinson’s disease, was reluctant to take part in the earlier film and agreed to be interviewed for it only if the film-makers followed her trip to Mexico. “I didn’t want to just be a talking head sitting in my living room talking about retirement,” she said.

The vibrancy of the music performed by Los Cenzontles, as well as the ugly politics that have affected both Mexicans and Mexican Americans in Trump’s “build the wall” era, inspired the film’s director, James Keach, to make the film. A key scene in it captures one of the organization’s most accomplished singers, Lucina Rodriguez, talking in front of the border wall about the harrowing experience she had as a child while crossing into the US with her family from her birthplace in Guadalajara. As it happened, Ronstadt and the singers arrived to film at the border the very day the Trump administration announced a state of emergency there. “We got to see exactly what the ‘emergency’ was,” Ronstadt said. “It was a few citizens walking around the streets shopping for groceries or picking up the newspaper. There were no hordes of brown people clawing to get across the border. But, all along, the Trump administration has been encouraging resentment of people from Mexico.”

As a prime example, she cites a horrific incident that occurred the other week in which the trumpet player for the Mavericks, Lorenzo Molina Ruiz, and his friend Orlando Morales, were allegedly violently attacked in a restaurant in Cool Springs, Tennessee, for speaking Spanish. Morales reportedly suffered a broken nose, internal bleeding and a concussion. Ronstadt blames the incident on the atmosphere fanned by the current administration. “As soon as Trump came down that escalator and called Mexican rapists, I said, ‘This is the new Hitler and Mexicans are the new Jews,’” she said. 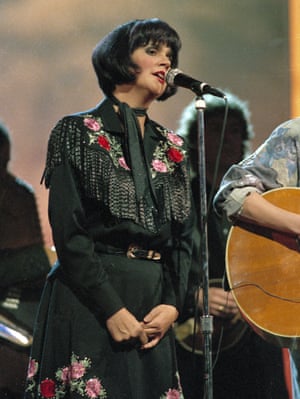 The result has greatly exacerbated feelings of alienation and internalized shame that have long affected Mexican Americans, according to Los Cenzontles founder Eugene Rodriguez. “It’s a deep shame – one we don’t like to talk about,” he said. “It’s something instilled in us by 500 years of colonialism in Mexico.”

Rodriguez feels that teaching young Mexican Americans about the variety and sophistication of that country’s music and art can help heal some of that shame. “If you’re playing with people who are among your community it’s a way to feel empowered and free,” he said. “They can take our land. They can kill us, but they can’t take our culture.”

For Ronstadt, Mexican culture has always been a source of pride. She believes she managed to escape the scourge of internalized prejudice because of her light skin and German surname. (Ronstadt’s great-grandfather immigrated from Germany to Mexico in the 1800s). “People didn’t have a clue I was Mexican unless they grew up with me,” she said.

At the same time, her ability to “pass” means that people felt free to voice their prejudices against Chicanos in front of her. “I heard plenty of it,” she said. “I’d straighten them out fast.”

Ronstadt grew up in a household in Arizona where her extended family always sang Mexican songs. She always yearned to record them but her record company nixed the idea. “I told them, ‘I’ve got all these songs in Spanish and I’m sure they’d be hits,” she said. “One of them was La Bamba and one was La Negra. I said, ‘If La Bamba was a hit, I can make La Negra a hit.”

But, she said, the company told her that Joan Baez had already recorded an album in Spanish for the label (Gracias a La Vida in 1974), so she couldn’t. Still, she bided her time. After the singer had giant hits with albums covering American standards in the early 80s, years before it became a significant trend for contemporary singers to do so, she told her record company her plans to cut an all-Mexican work. She said the company’s executives “were horrified. But I had to sing those songs or I was going to die.”

The resulting collection wound up becoming the biggest-selling non-English language album in history. Ronstadt believes that album touched so many people with no experience in this music because the songs have “emotion that’s very accessible. If it worked on me, I figured it would work on other people,” she said.

It was a great relief to Ronstadt to finally sing these songs after years of belting out rock anthems in stadiums. “I was bored with rock’n’roll,” she said. “And I was tired of singing fast songs. I’m a ballad singer. And I like drama and nuance. This music has richer poetic images and more interesting rhythms.” 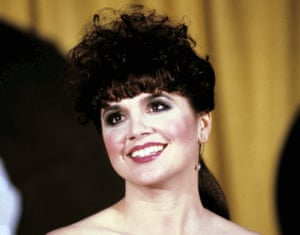 Ronstadt in 1984. ‘I like to say that Mexicans took German and French music and made it sexy.’ Photograph: AP

The songs she sang on the first of three Mexican records she recorded came from the northern region of Sonora, where her family’s roots lie. “There is a lot of German and French influence there,” she said. “The music uses accordions and German-style brass bands, reinterpreted in a Mexican style. I like to say that Mexicans took German and French music and made it sexy.”

Rodriguez remembers very well hearing Ronstadt’s Mexican music in the 1980s. Many in his community, he says, didn’t know about her heritage at the time, but once they found out, it engendered pride. “All the girls in the neighborhood wanted to sing like Linda,” he said.

Rodriguez first met Ronstadt in the early 1990s, when she came across his students performing. She was deeply impressed by their authentic rendering of traditional music from a land some of them had never seen. “They were playing music for the right reasons, to express their feelings and to connect with their grandparents,” she said. “They’re not performing like trained seals.”

Their work moved her so much, she started bringing her famous friends to see them, including Browne (who wound up writing a song with Rodriguez about the plight of Mexican immigrants titled The Dreamer), Bonnie Raitt and the Chieftains, who took Los Cenzontles on tour with them. The group has also worked with David Hidalgo of Los Lobos, recorded scores of their own albums and produced their own documentaries. Collectively, their work captures the unique experience of Mexicans in America. “Mexican America is like its own country,” said Ronstadt. “We call it Aztlan, after the mythical places where the Aztecs originated from.”

In one of the most wrenching scenes in the film, Rodriguez expresses his anger over the treatment of Chicanos in the US, a feeling Ronstadt shares. “I get especially angry when I see how people are treated when they come up here looking for work, especially the farm workers,” she said. “I challenge any prep school white boy to spend an hour picking strawberries in the full sun where you’re bent over and somebody sprays pesticide on you. And without them, we can’t eat.”

At the same time, the film captures the joy, humor and skill of the music. One moving scene shows a student performing A la Orilla de un Palmar, a song about an orphaned Mexican girl which Ronstadt first heard sung by relatives when she was three. As the student performs the song in the film we see Ronstadt mouthing along with the words. “I don’t sing any more,” she said. “But I’m still involved with music. Los Cenzontles is my musical home now.”