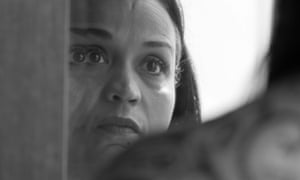 This is a viscerally emotional documentary about Sibil Fox Richardson, an African-American woman from New Orleans who almost two decades ago began a passionate, desperate campaign for her husband, Robert, to be parolled from Louisiana state penitentiary where he had been sentenced to 60 years for armed robbery. Sibil had served three-and-a-half years in jail for her own bungled role as the supposed getaway driver for this farcical and easily foiled crime, which resulted in no serious injuries and whose perpetrators had no previous convictions.

Pathetically, the couple had hoped to invest the supposed proceeds in their own hip-hop clothing store. The film shows Sibil in her new role as a mature and impressive inspirational speaker and the devoted mother of four children, juxtaposing this with her 90s home-video footage, showing her as a girlish twentysomething. Sibil is a compelling figure here and there is real drama and power in the contrast between her youth and middle age, growing old as the children grow up, in the shadow of the pitiless “time” that her husband is serving. Her commanding personality is, for me, more important than the film’s problems.

Watch the trailer for Time

Bradley presents the story in black-and-white, which means not simply shooting present-day material in monochrome but correcting Sibil’s own colour DV footage as well – perhaps to create a more “artistic” look, which seems unnecessary. And the film is a bit reticent on the background of the case.

The excessive severity of Robert’s sentence was partly due to the racism of a judicial system that facilitates the mass incarceration of black men. The film conveys this. But it does not mention that the couple also, according to reports, discovered the addresses of two jurors before the trial and recklessly visited them to explain what good people they were; the jurors reported this to the judge. However, the point of the film is Sibil’s decades-long ordeal and she emerges with heroic and compelling dignity.