Alec Baldwin on the set of Pixie: ‘My priest will never see this movie. I’ll make sure of that’ 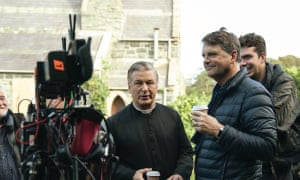 Alec Baldwin on the set of Pixie.
Photograph: Paramount

It is an autumn morning in pre-pandemic Belfast. Nuns stroll around a disused church brandishing shotguns while the priests are packing pistols. In front of the altar, standing beneath a sack of drugs that hangs from the rafters like a pendulum, is a thick-necked, blue-eyed bruiser in a cassock and dog collar. He starts to speak, trips over his words, then roars a string of expletives (“Fuckfuckfuck!”) before quickly righting himself: “I’m good, I’m good, let’s keep going.” The spectacle of Alec Baldwin fluffing his lines is truly something to behold.

This is the final week of shooting on the British comic-thriller-cum-road-movie Pixie, and the second of Baldwin’s days on set as the gun-running, drug-dealing priest, Father Hector. “Aside from being a man of the cloth and being involved in some pretty lurid dealings, he is a businessman,” Baldwin tells me later by email. “He has a job to do and sometimes people get in the way. Even when things turn ugly or violent, I try to be merciful.”

Alec Baldwin: ‘You naughty English could fold sex into dentistry’

He has known the film’s director, Barnaby Thompson, for several decades, though it was Thompson’s son Preston – the screenwriter of Pixie – who offered him the role. “Preston saw Alec at a party,” recalls the producer James Clayton, “and said: ‘Do you want to play an Irish gangster priest?’ Apparently, Alec replied: ‘Don’t you dare offer that part to Brendan Gleeson!’”

Pixie herself, played by the Oldham-born Ready Player One star Olivia Cooke, is the stepdaughter of a Sligo gangster (Colm Meaney). After a planned heist of hers goes wrong, she escapes across the spectacular countryside with two accidental accomplices (Ben Hardy and Daryl McCormack) in tow, as well as a dead body in the boot. Her explosive confrontation with Father Hector is the scene being shot today.

Arriving on set, Cooke takes a pew – an actual pew, that is, one of several lined up on the grass in front of the church – and nurses a coffee. “The film twists this idea of the woman scorned and turns it into a story of empowerment,” she says. “Pixie does some dastardly stuff, but hopefully you still love her. You come to understand why she’s doing what she does. It’s not just for the thrills. And the way Preston has written her isn’t gendered. People talk about strong female characters but a weak female character is really just one that’s been badly written.”

As Baldwin runs through his tirade again inside the church – “We’re going to snuff you out and bleed you slow!” he promises his adversaries – I inspect the storyboards pinned up outside, which have captions such as: “Whip-Pan to Old Frail Priest with Magnum-Style Gun.” Standing nearby is the 26-year-old Preston Thompson, named in honour of Preston Sturges, the master of screwball comedy. “Everyone at school thought I was named after Preston North End,” he shrugs.

With that name, it was perhaps inevitable that he would write a frantic comedy. The idea arose from a road trip that father and son took together in the west of Ireland. “It’s the most breathtaking landscape,” he says. “I always liked the idea of doing a western set there in the lush green grass and rolling hills, with all these slightly idiotic gangsters.” He shared the thought with his father. “His response was: ‘It doesn’t sound great.’ That put me off for six months. Then I showed him my first draft, and he said: ‘I want to direct it.’ I was, like, ‘Oh do you, motherfucker? You put me off this!’” He grins. “I made him wait.” 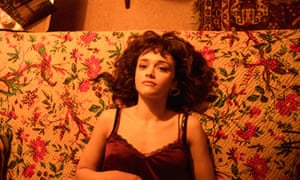 Olivia Cooke … ‘Pixie does some dastardly stuff, but hopefully you still love her.’ Photograph: Aidan Monaghan

I ask Barnaby what changed his mind. “I was quite wary of the gangster genre,” he says. “It’s a very well-trodden path. But there was something liberating about having the Irish backdrop and a female lead. It managed to avoid the cliches.” Despite having been in the film industry for decades, producing everything from Wayne’s World to Spice World, Pixie is his first solo directing gig. (He previously co-directed the rebooted St Trinian’s movies with Oliver Parker.) “To find yourself directing a film that’s written by your own son is one of the great joys. You can be frank with each other in ways that you often can’t with other collaborators.”

Preston offers some examples: “He’ll say to me: ‘This scene is really sloppy writing.’ Or I’ll tell him, ‘That’s an old man idea.’” Watching his father at work gives him a visible glow. “I know how much he’s wanted this over the years. I’ve never seen him happier.”

The curly haired, dough-faced Meaney, best known for Roddy Doyle adaptations including The Commitments and The Snapper, marvels at their relationship. “I’ve never met a father and son who get on so well,” he tells me during a break in his trailer. He’s full of praise, too, for the writing. “I look for things these days that are quirky, fun, and that I suspect I’ll have a good time on. My character is a gangster but it’s become a drag for him. All he wants is to cook. His attitude is: ‘Oh, I suppose if we really have to shoot this guy …’”

A full year later, and with Pixie one of the few high-profile titles that hasn’t been pushed back to 2021, I call Barnaby to discover what effect the pandemic had on finishing the film. “We’d got far enough to be able to complete it,” he says. “Post-production was mostly done remotely, though I did go into Soho during lockdown to do the mix. That was quite spooky, like being in 28 Days Later.” It is still a month before the postponement of No Time to Die and the closure of the Cineworld chain but it is already clear that Pixie will open in an unstable landscape. “These are challenging times but I desperately want people to see the film in cinemas. We never even had a conversation about streaming.”

His desire for it to play on the big screen is understandable. Alongside Cooke’s lively, eye-catching performance, it is John de Borman’s ravishing cinematography that helps Pixie establish its own identity. After all, there was no shortage of other movies being mentioned when I was on set. Preston likened Pixie to Ferris Bueller’s Day Off and Y Tu Mamá También, while James Clayton named Baby Driver, In Bruges, Layer Cake and True Romance as reference points. “Tarantino-esque” was how he described the violence. “The statue of the Virgin Mary gets its head blown off. It’s not a Peckinpah movie. It’s supposed to be funny.”

Baldwin agrees. “It is, by turns, clever and funny,” he says. “It pops with cynicism and action, and it has this great young cast, including Olivia, who reminds me of Holly Hunter. These sorts of black comedies only work when it’s real and not overdone, so we tried to play the craziness as real as we could.” How will he explain to his own priest this portrayal of a corrupt man of God? “My priest will never see this movie,” he says. “I’ll make sure of it.” Amen to that.

• Pixie is in cinemas from 23 October