David Byrne’s lockdown despair: ‘I’d wake up and ask – What am I doing today and why?’ 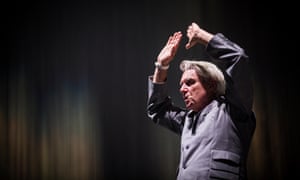 ‘I kept telling myself I was OK,” says David Byrne, recounting his last seven months living through various stages of lockdown in New York. “But like a lot of people, there were mornings when I’d wake up, stare at the ceiling and ask myself, ‘What am I doing today … and why?’ There have been moments where you start to wonder what it is all for.”

One of the things Byrne has been doing is ink drawings: the former Talking Heads frontman is about to put a set of humorous, hand-drawn images created during the pandemic up for sale. And it’s through these that you perhaps get a more accurate sense of his state of mind.

“They’re not explicitly about lockdown or being alone,” he says. “But that’s the undercurrent. Doing something creative like this becomes a kind of therapy, where your fears and anxieties come out. Things you maybe daren’t say to yourself, much less to other people. So someone may look at them and say, ‘Oh, so is that what you really think?’”

He lets out a manic laugh, a frequent occurrence during our enjoyable Zoom chat. With his white hair and spectacles, jerking his arms and body around like an early Talking Heads record, he seems every bit the nutty professor, bursting with ideas.

In 2018, Byrne set up an online magazine, Reasons to Be Cheerful, through his Arbutus Foundation, and these drawings were created for that – not to fit specific stories but to be used as dingbats (also the name of the series) to break up the text. He has done so many now that he’s lost track of them, but whenever I bring up a specific one he bursts out laughing at how absurd they are. There’s Nature Man, which depicts a mountain range with eyes. “That could be read as a climate thing, but it’s also just … very creepy,” he chuckles. And there’s TMI, which shows a person buried beneath a giant mobile phone. “Everybody has that feeling!” he says, laughing again. “And right now people are saying they’re never going back to the office. OK, so it’s going to be just screens from now on? God save us!”

The illustrations are being sold for $3,000 (£2,275) each, with the money raised covering costs for writers, editors and designers (“Has the Guardian tried this as a form of income yet? I’m just imagining asking all the writers there if they could maybe contribute some nice watercolours”). Reasons to Be Cheerful is working on a project called We Are Not Divided, which focuses on stories that bring opposing sides together in the run-up to the election. Hmm, good luck with that, I say. 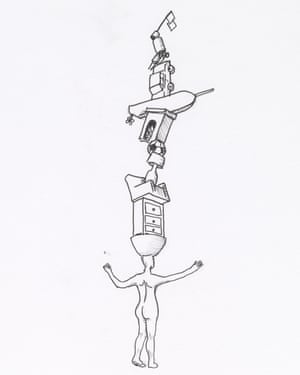 “Yes, and that was my reaction too,” he grins. “But it’s been running for a few weeks now and they’ve found some great stories. Some of my bandmates just went for a bike ride on Staten Island and there’s a little community there from Sri Lanka, which only came out of 30 years of civil war in 2009. So you have people from both sides of that war living cheek by jowl, and you think, ‘How is that working out?’ Well, in Staten Island, it’s working out really well, actually. They all love the same food, so they come to the same restaurants, they’ve started talking to each other. Now that they’ve been separated from the conflict, they can treat one another as people, as opposed to the enemy.”

Such stories are helping Byrne feel more positive about the world, but he’s not head-in-the-sand about the struggles going on around him. “I read the papers every morning and I see new chicanery every day,” he says. This morning it was a story about Republicans putting out “misleading” ballot boxes in California. “I’ve done a lot of research on the history of the Philippines and I often think, ‘This is Philippines-level shit here.’ The kind of country where you go, ‘Oh yes, that’s the kind of thing they do there.’ Well actually, it’s the kind of thing we do here.”

Aside from his magazine drawings, Byrne has been promoting the filmed version of his hit Broadway show, American Utopia. Director Spike Lee had been a huge fan of the stage version, frequently turning up to watch it: “Not every night, but basically he had an open invitation. I think he came at least seven times. He really dedicated himself to understanding how it worked.”

He has also passed the time during lockdown teaching himself new recipes and going on socially distanced bike rides. But one thing he hasn’t found time for is reading his Talking Heads bandmate Chris Frantz’s memoir Remain in Love, which painted a, shall we say, less than rosy picture of Byrne and what the author deemed to be his runaway ego (“Believe me, if you knew David Byrne, you would not be jealous of him,” was one memorable quote from a recent jaw-dropping interview). “Noooo,” he sighs when asked about the book, before adding pointedly: “I knew that if I read it I would get asked about it. So I’ve avoided it.” 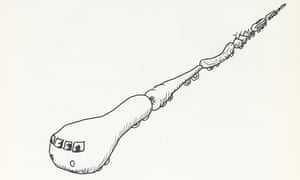 Some of Byrne’s drawings carry soft political messages. Supply Chain shows a snaking train made out of vegetables; Byrne says the pandemic made us all aware of how complex and important they are: “How does the food get to the grocer? How does the grocer stay safe? The demand for bikes has rocketed here and the poor shops can’t get the parts.”

Balanced Life, meanwhile, depicts not blissful feng shui but a person with a teetering tower of possessions stacked on their head. “That’s how it feels sometimes, like you’ve got all this stuff weighing on you – your house, this and that, maybe another person or your children. It’s a real balancing act.”

Yet he’s come through it unscathed? “So far … I think?” he says, cautiously. But he’s not calling time on the drawings any time soon. “We’re not out of the woods just yet.”