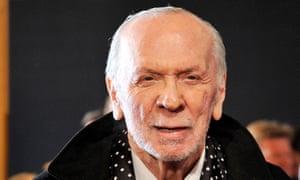 Herbert Kretzmer at the premiere of the film version of Les Misérables in 2012.
Photograph: Dave M Benett#Retired/WireImage

Herbert Kretzmer, the lyricist behind the English-language adaptation of Les Misérables, has died aged 95.

Kretzmer also co-wrote Charles Aznavour’s 1974 UK No 1 hit She and penned the words to the 1960 song Goodness Gracious Me, which became popular through Peter Sellers and Sophia Loren’s version for the film The Millionairess.

Paying tribute on social media, Tim Rice described Kretzmer as “a great lyricist and man of theatre and popular song … a giant of his trade”.

How we made Les Misérables

Born in South Africa, Kretzmer moved to London in the 1950s and forged a twin career as a journalist and lyricist, believing both to adhere to similar structural rules. He was a stage and TV critic, first at the Daily Express and then the Daily Mail, but retired at 61 when it became apparent that Les Misérables, which is based on the French writer Victor Hugo’s 1862 novel, would be a huge hit. Until the coronavirus pandemic, Les Misérables had been running in London since 1985 – the longest run for a musical in the West End and the second longest in the world.

In a 2013 interview with the Guardian, Kretzmer recalled the five months he spent inside his house frantically writing the musical’s English lyrics, and the resultant success it brought: “Les Misérables has brought me my London house and my wife, whom I met at the opening-night party in New York,” he said. “I often marvel at how [it] changed my life.”