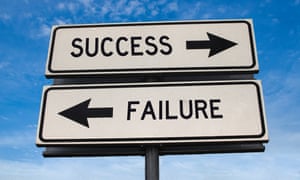 At a crossroads in life …
Photograph: Maria Vonotna/Getty Images/iStockphoto

Elizabeth Day’s 2019 book How to Fail, a winning blend of memoir and self-help, set out to prove Truman Capote’s assertion that “failure is the condiment that gives success its flavour”. This shorter and bittier book distils seven “failure principles” that Day developed as part of her live “How to Fail” tour, itself based on a podcast in which she talks to public figures about their failures.

Day is a witty and likable writer, just the right side of self-deprecating, and alert to the contradictions of having great success as an authority on failure. She argues, rightly, that “there is no hierarchy of distress”. Anyone can fall down the yawning gap between their aspirations and their achievements; anyone can mourn their unlived life. Worse than mere disappointment, failure exposes our dreams as dead ends. It is a mortifying reckoning with the complacent fictions we have built around ourselves. Day is thoughtful and probing about what success really amounts to, and why it is rarely the answer to our problems that we mistook it for. Failure, in her book, makes us aware that there are numberless ways of living a life well.

The problem comes when she insists that failure can always be turned into a positive. Failure for Day is “data acquisition” – information and feedback that we can put to good use. The one-note, upbeat message is that “success tastes all the sweeter if you’ve fought for it”.

Like much of the current discourse of mental health and wellbeing, Day’s failosophy relies on removing the stigma of feeling bad. She claims that “when you destigmatise failure, it loses its power to harm you”. This is not a new thought. In recent years the personal growth industry has grown a whole sub-industry of failure wisdom – books on “the gift of failure” and “the up side of down”, and those motivational talks where the speaker bestrides the stage with a headset mic and no notes, telling you that their success began with failure. A cliche of the university graduation ceremony is the distinguished speaker insisting that failure has been their greatest teacher. The failing-well movement is a symptom of our new Promethean age, with its faith in the endless reinvention of the self. Behind it lies the wishful thinking of alchemy, where the base metal of failure turns into golden accomplishment.

Day is too nuanced a thinker to succumb to the hokiest excesses of the genre. When she writes that “the universe is unfolding exactly as is intended” and that “life will generally teach us the lessons we need to learn”, she concedes that this might “sound a bit woo-woo”. There are not too many glib aphorisms here like “the juicy plum lies in your future” (although there is that one).

This book left me frustrated not with its author but with the publishing industry’s demand that books be turned into cheerful and sellable life lessons. It adds little in content or argument to How to Fail. Some of the stories – such as Day selling the wedding dress from her failed marriage on eBay – reappear. The book feels padded out with standalone quotes from Day’s podcast interviews. Taken out of context, these read rather like those tweets that celebrities send on exam results day about failing their A-levels. There is always an unspoken coda: “And look at me now!” Since these reflections are lifted directly from conversations, they don’t even have the turned quality of inspirational quotes. Comments such as “We change and we grow all the time” and “Success is a personal perception” take up a whole page, as if they were the maxims of La Rochefoucauld. 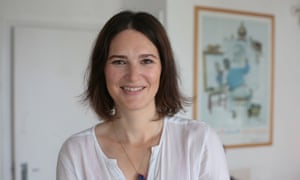 A more interesting question for Day to explore might have been why we are all meant to be so relentlessly positive about failure. This demand turns failure into yet another growth opportunity, an asset that just needs to be sweated for it to become valuable. If failure can only be entertained as the rocket boost that propels us to greatness, then we are no longer talking about failure at all. And if we are so impatient to escape from the shame of failure with stories of redemption, then its stigma is still there, right where we left it.

Our failures can’t simply be solved by acquiring that voguish quality, resilience. Failure, like everything else in the free market, is felt unequally. You can work hard, nurture your talents lovingly and still fail – and your failure will be rewarded with the low status, insecurity and precarity that normally comes with failure. Or you can be an expensively schooled white man with a facile tongue, a plausible air and an unbudgeable sense of entitlement and your actual failures will mean nothing, as you proceed endlessly, guiltlessly and ever-upward.

Here’s what I think. We can learn from our failures – sometimes. Mostly, though, failure is just a waste of time, and time is something we mortals never have enough of. It’s nothing to be ashamed of, but nothing to celebrate either. It can, perhaps, make us more tender and undefended, more tolerant of the rest of failing, flailing and messed-up humanity. Granted, this is all a bit of a downer. I don’t think I could get a podcast out of it. But it does have one advantage over the now tired instruction to “fail well”: it happens to be true.

• Joe Moran’s If You Should Fail: A Book of Solace is published by Viking. Failosophy: A Handbook for When Things Go Wrong by Elizabeth Day is published by HarperCollins. To order a copy go to guardianbookshop.com. Delivery charges may apply.