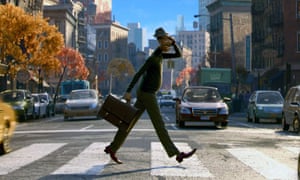 Here is Pixar’s charming, bewildering and beautiful new animation about life after death and life before death – and that title incidentally reminds you how we got the word “animation”. It’s a free-jazz fantasia about a sad and lonely musician, with globules of Frank Capra, 60s psychedelia, 80s body-swap and an old-fashioned stairway to heaven that put me in mind of Pressburger and Powell.

But the keynote is pure Pixar: that intense, childlike, ever-renewing rapture that inside all of us, there is this secret existence and identity that the outside world knows nothing about.

The story is a deeply strange and complicated one: a where-are-we-going-with-this journey that occasionally messes with the rules of narrative and character consistency. But it makes its own kind of sense when the film arrives at a mysteriously moving epiphany: a montage of moments and glimpses that hint at an existence higher than the one in which we are following our all-important showbiz dream.

Soul initially seems to indicate that the choice is between the glories of being a famous jazz musician and the selfless heroism of being a great teacher. But the story ultimately (and enigmatically) gestures at the idea that this is a false choice, or no choice at all, and that we are looking in the wrong direction. And it’s all in that swirling constellation of images. I didn’t think it was possible to be moved – really moved – by the simple image of night-time New York with its lights bordering Central Park’s vast rectangle of darkness. But that’s what happens in this weird, lovable story, directed by Pixar’s Pete Docter and written by Docter, Mike Jones and Kemp Powers. (Powers is also credited as co-director.)

Our hero is Joe (voiced by Jamie Foxx), a tired, middle-aged, African-American guy in New York whose passion is jazz, a calling to which he has evidently sacrificed his personal life: he is now single and still taking his laundry to his elderly mother who runs a tailoring and alteration business.

Nowadays, poor Joe earns a few bucks with a part-time job teaching band at a high school, but still yearns to play jazz piano in front of an adoring, connoisseur crowd. But just when he is faced with finally abandoning his jazz dream in favour of a bittersweet Mr Chips destiny of inspiring young people, a former student of Joe’s gets him the chance to play with one of the most famous jazz musicians in the world. 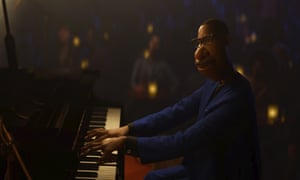 And just when Joe’s life could hardly get more dramatic, he falls down a manhole, loses consciousness and enters a strange otherworld domain, a quasi-heaven existing both before and after and during death, in which this spectral “Joe” is expected to mentor an errant, brattish, not-yet-born soul called simply 22 (voiced by Tina Fey). So what can soul-Joe and 22 do but go back to Earth, alighting in comatose body-Joe’s hospital bed; 22 accidentally invades Joe’s body and soul-Joe invades the “therapy cat” which the hospital authorities have placed on his bed, in the hope that its furry ministrations would awaken him. So Joe and 22 take off across New York in the wrong bodies, on a mission to get Joe that jazz gig.

And their adventures can sometimes get even more confusing. When 22 speaks to Joe’s buddies through Joe’s mouth but with her own voice nobody seems to notice. Perhaps the convention is that they hear Joe’s voice – but we, the audience, hear 22’s to remind us what’s going on. But later when they confront Joe’s stern mother, 22 speaks with Joe’s voice at last and appears to intuit what he would say.

It’s all very headspinning, and there is real Yellow Submarine quality to the film’s innocent urgency and idealism which take it to the very brink of incoherence. That can sometimes be exasperating but also really captivating, especially in that final visual cadenza in which Docter and Powers are really are going above and beyond the traditional Hollywood ending. It’s a deeply sweet, happy, gentle film.

•Soul screened at the London film festival, and will be available on 25 December on Disney+/