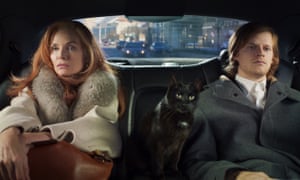 In the last act of this year’s New York film festival closing entry French Exit, a character whom we’re supposed to despise tells a room full of misfits whom we’re supposed to love (or at the very least find vaguely interesting): “I don’t like you people.” With that he leaves in a huff and we’re left wishing we were off with him, a merciful release from a torturous trifle of a movie filled with people who are very, very, very hard to like.

Not only are the characters, created by Patrick DeWitt adapting his 2018 novel, hard to like but they’re hard to buy as anything other than smug literary caricatures who might have worked on the page but who crash on the screen, spouting affected, overwritten dialogue in a manner that quickly goes from tiresome to unbearable. It’s an uneasy atonal misfire, an irritating collection of increasingly false moments, a thudding disappointment for those who managed to catch director Azazel Jacobs’ last film, the nuanced and knotty romantic drama The Lovers, a portrait of a marriage brought to life with specificity and acute observation. There’s none of that here, a defiantly unbelievable and drably directed heap of quirk that’s as overstuffed as it is underpowered, a head-scratching failure for all involved.

It’s the story of rich people struggling with becoming a bit less rich arriving at a time when that prospect sounds even less appealing than usual and it’s written without any of the self-awareness that could have made it palatable. It’s not as if DeWitt is asking us to feel sympathy for the pampered mother-son pairing forced to downsize from a Manhattan townhouse to a spacious Parisian apartment, but he’s asking us to feel something, a niggling problem that lingers throughout the film’s overlong runtime. Eccentric socialite Frances (Michelle Pfeiffer) has gained a certain notoriety in the richest circles of New York after she found her husband dead and decided to go away for the weekend before reporting it. She lives with her son Malcolm (Lucas Hedges) and they share a brittle relationship, one that’s tested even further when Frances is told she has run out of money. After a friend offers them her apartment in Paris, they opt for a change of scenery along with their cat, who Frances believes is embodied by the spirit of her dead husband.

Despite being based on a book from just two years prior, there’s something very early 00s about French Exit, belonging in the dusty post-American Beauty boom in dysfunctional family indies, slotting alongside films such as Igby Goes Down, Tadpole and Imaginary Heroes with a heavy nod toward The Royal Tenenbaums, yet emerging as far lesser than its patchy predecessors. DeWitt confuses an abundance of eccentricities as characterisation and his stilted sub-Wes Anderson dialogue is suffocating when lifted out of his book as well as a total mismatch for the actors picked to speak it. Pfeiffer, who has always been a luminous movie star rather than a storied character actor, is lost here on a smaller canvas and delivers an uncomfortably misjudged and outsized performance, the kind that Patricia Clarkson could do in her sleep but there’s at least a modicum of effort which is more than can be said for Hedges who lumbers through the film with the confusion of someone who doesn’t quite know what he’s doing or why he’s there. They encounter a string of wacky one-noters, from Danielle Macdonald’s cruise ship psychic to Valerie Mahaffey’s lonely widow, and silly scenarios such as a bathroom seance and a frozen dildo, but the pile-up of oddities grates rather than intrigues, a useless assemblage of weirdness, surrealism for surrealism’s sake.

There’s a self-satisfaction to the film that I found incredibly off-putting, each “witty” line delivered with a sly wink followed by space for restrained laughter. Yet instead, it feels like we’re watching the first night of a very bad play, awkward coughs filling the dead air. When emotion crashes its way into the film, it’s too late to make an impact and given how these characters have been presented to us, it’s impossible for us to feel or care for them all of a sudden. In a sub-par year for films, with many moving to 2021, there will be worse then French Exit to come but I doubt there will be anything quite so annoying.