Britney Spears: where to start in her back catalogue 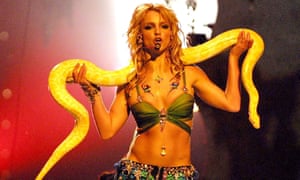 ‘The heft of soap bubbles but the force of trucks’ … Britney Spears at the 2001 MTV VMA Awards.
Photograph: Chris Polk/FilmMagic

The album to start with

Britney Spears: Piece of Me – video

“There’s only two types of people in the world,” Britney Spears sang on the title track of her 2008 album, Circus. “The ones that entertain and the ones that observe / Well, baby, I’m a put-on-a-show kinda girl.”

Quite right: her DNA was encoded with the drive to perform, and each successive album – Blackout was her fifth – took putting on a show to another level, as she grew away from chaste small-town beginnings toward an adult life that juggled motherhood, divorce and desire. Her music moved in step with her, becoming more explicit and experimental.

Blackout, though, was a different kind of show – a set of songs recorded at her lowest point, when she’d quit rehab twice and lost custody of her children. Rather than working around her erratic behaviour, her producers – most notably Danja and Bloodshy & Avant – worked with it, making it as much a feature as the electronic future-pop of the songs.

Her emotional unravelling, as announced up front by the album title, together with the ambitious production, yielded Britney’s artistic pinnacle. And, to quote one of only two songs on which she has writing credits, it’s a “freakshow”. (It should be said that, despite its title, Freakshow’s actual subject matter is hedonism, a lyrical fallback that runs through many of Blackout’s other songs – chiming with her mission to make a club album while offering the idea of her blocking out the chaos by partying as hard as possible.)

As with most left-field records, it takes some getting used to. At times, Spears sounds so distant that Gertrude Stein’s quip, “There’s no there there”, is apposite. The pitch shifting applied to her vocals amplifies the disjointedness – in that respect, the songs to hear first are Piece of Me and Get Naked (I Got a Plan), which distort and frazzle her voice until it’s nearly unrecognisable. On the latter, which is heavy with oddball creaks and whistles, her tone is so bubbly she sounds like her 16-year-old self. Piece of Me, meanwhile, is one of the only tracks to directly address her state of mind (“I’m Miss American Dream since I was 17 … I’m Mrs Oh My God That Britney’s Shameless … You want a piece of me”).

But anywhere on the record is a good place to start. From Toy Soldier’s martial Europop to Gimme More’s heavy-breathing robo-disco, Blackout presents Britney at her boldest.

The three to check out next

Spears was frustrated that her 25m-selling debut failed to showcase her vocal strengths: her unprocessed voice had much greater range and depth than the cyber-kitten purr created by producer Max Martin. She was also ambivalent about the songs themselves, saying they were “great, but they weren’t very challenging”. Hopefully she’s changed her mind in the 21 years since, because … Baby One More Time is an era-defining romp.

Partly it was a case of timing: she appeared just as millennials were looking for new faces to spend their money on. Spears, a 17-year-old from suburban Louisiana, was one of their own. But she wouldn’t have taken off without this set of songs and their videos. The best tracks – the title song, (You Drive Me) Crazy – have the heft of soap bubbles but the force of trucks, combining Britney’s breathiness and arrangements that employed Eurodisco, new wave and futuristic voice effects. Don’t overlook the album’s two outliers, seemingly thrown in just for fun: the schoolyard-ska Soda Pop and an icy cover of Sonny and Cher’s The Beat Goes On.

Even if it weren’t the parent album of one the best singles of this century, Toxic, In the Zone would still warrant a Listener’s Digest nod. (Of the Grammy-winning Toxic, Britney has said she took a shine to it because it was “really different” – that’s one way to describe a pop tune made of Bollywood strings, rockabilly guitar and a spy-movie storyline. And she’s right – there’s nothing else like it in her catalogue.) It also contains Me Against the Music, a hip-pop duet with Madonna that was interpreted as a passing of the baton to Spears, though it wasn’t: the two women meet and sing as high-impact equals. As a whole, In the Zone is a happy collision of house, dreamy electro-pop and Britney’s lyrical preoccupations (she co-wrote nearly every song), which have her perched on the cusp between teen poppet and sexually confident woman.

Her most recent album, Glory focuses on carnality to the point that the only response can be: “Britney, we get it.” But having awakened from the EDM torpor of her 2013 album Britney Jean, she also sounds as if she’s having fun. (She even says “That was fun!” at the end of the Duffy-esque What You Need, while Private Show finishes with actual giggles.) Glory is a mish-mash of styles (Latin, reggae, brassy 60s R&B) woven together by a good deal of confidence – more confidence, in fact, than Spears has ever mustered across a full album before.

‘Britney Spears is a genius’: Max Martin, the powerhouse of pure pop

One for the heads

Recorded during the Blackout sessions but inexplicably scrapped (and inevitably leaked), Baby Boy is a gorgeous lullaby addressed to her ex, Kevin Federline (or, possibly her ex-ex, Justin Timberlake). Recorded without Auto-Tune, her tone has an utterly crushed edge (“Why did you desert me?” she asks) not present on any other song.

Britney Spears, Teen Queen, by Steven Daly
As famous for the David LaChapelle cover shot of Britney lying on a bed in her underwear as Daly’s candid interview, this 1999 piece reveals that a girl can be ferociously ambitious but still crave mama’s grilled-cheese sandwiches

Victim? Survivor? After 20 years of Britney Spears, the jury’s still out, by Bidisha
A 2018 essay that shows the events of 2008 in a persuasively different light (“She demonstrated the effects of decades of abuse and was further abused for it”), and wonders whether Spears can adapt to a world where female performers are expected to take a position on issues outside their pop bubbles.

This article contains affiliate links, which means we may earn a small commission if a reader clicks through and makes a purchase. All our journalism is independent and is in no way influenced by any advertiser or commercial initiative. By clicking on an affiliate link, you accept that third-party cookies will be set. More information.