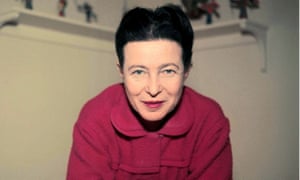 A novel by Simone de Beauvoir that was deemed too intimate to release in her lifetime will be published for the first time later this year.

The French writer and feminist’s Les inséparables tells the story of the “passionate and tragic” friendship she had as a young girl with Elisabeth “Zaza” Lacoin, who died of encephalitis at the age of 21. Written in 1954, in the first person, the novel sees the author of feminist classic The Second Sex, published five years earlier, tell the story of the beginning of the friendship, as Andrée, or Zaza, joins the same class as Sylvie, or Simone.

“Sylvie is instantly charmed by her new classmate. She admires her, she cherishes her, she does everything in order to make Andrée loving her back. Quickly they became inseparables until high school and Andrée’s tragic death,” said literary agency 2 Seas. Zaza’s death followed her family’s fierce opposition to her relationship with Maurice Merleau-Ponty, whom she had met through Beauvoir.

The agency said the novel was “too intimate” to be published in Beauvoir’s lifetime, but was recently found in her archives by her daughter, Sylvie Le Bon-de Beauvoir, who wrote the preface.

Vintage will publish the “short, vivid” novel for UK readers in late 2021, with senior editor Charlotte Knight describing it as “a moving, gripping coming-of-age novel about female friendship and finding one’s own way in the world.”

The publisher said the heart of the story was concerned with “the friendship between two young women struggling against conventional ideas of what a woman should be in early 20th-century Paris: chaste, devout, obedient and obliged from a young age to set aside her own interests and passions.

“Beauvoir’s real-life intense, formative relationship with her friend Zaza shaped, in many ways, the woman Beauvoir was to become – while Beauvoir broke free, Zaza never found a way out,” said Vintage.

Beauvoir writes in her memoir Force of Circumstance that when she showed the novel to Jean-Paul Sartre, her partner, “he held his nose”. “I couldn’t have agreed more: the story seemed to have no inner necessity and failed to hold the reader’s interest,” she wrote. Beauvoir would go on to tell the story of the friendship in her non-fiction Memoirs of a Dutiful Daughter; Deirdre Bair’s biography of the author tells of how the two were known at school as “the inseparables” by teachers and students alike.

Le Bon-de Beauvoir, who is her literary executor, told the New York Times that she first read the manuscript in 1986, shortly after Beauvoir’s death, and intended to publish it, but “other publishing priorities simply got in the way, which is why I’m just getting to her novels and short stories now”.

“When she wrote it, in 1954, she had already honed her craft as a writer,” said Le Bon-de Beauvoir, who is planning to release more fiction from the author. “She destroyed some works that she was unhappy with. She didn’t destroy this one. About her papers, she told me, ‘You’ll do as you think is right.’”

Les inséparables will be published in French in October, by Éditions de l’Herne, with Vintage in the UK and Ecco in North America to publish it in English in 2021. The book has been sold in more than a dozen languages.