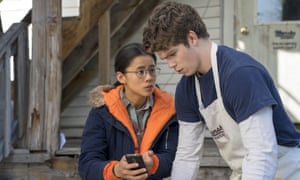 Leah Lewis and Daniel Diemer in The Half of It. What keeps the film mostly on track, even in its scrappier moments, is its central trio of accomplished young actors.
Photograph: KC Bailey/AP

There’s a satisfying ease to Netflix high school comedy The Half of It, a charming twist on the Cyrano de Bergerac formula that deserves slightly more attention than most of the streamer’s other made-to-order sleepover pics. A teen market that had been underserved by studios has now been exhaustively cornered by the company but often without much care or inventiveness, a conveyor belt of content that prioritises quantity over quality. It’s refreshing then to see a film such as this emerge from the same production line, slickly ticking all the same boxes but with a noticeable uplift in enthusiasm, grafting its own identity on to the boilerplate format.

In the simple town of Squahamish, Chinese-American teen Ellie (Leah Lewis) feels like an outsider. Living alone with her dad, who can’t speak much English, and spending her school time either avoiding bullies or writing their essays for them, she’s grown accustomed to fading into the background. But when gawky jock Paul (Daniel Diemer) asks for an unusual favour, her lonely life takes a surprising turn. He’s in love with Aster (Alexxis Lemire) and wants to use Ellie’s writing abilities to impress her with a love letter. But as Ellie invests more time into helping Paul get the girl, she realises that she might want the girl instead …

There’s a reason why the central dynamic of Edmond Rostand’s play continues to find its way into romantic comedies so many years later, its themes of inner beauty, insecurity and well-intentioned deception proving dramatically irresistible. Even Netflix has skirted near similar territory before in 2018’s catfish comedy Sierra Burgess is a Loser. So while it makes some of the mechanics of The Half of It feel a little bit, well, mechanic, it’s a difficult escalation not to engage with, especially as writer-director Alice Wu works hard to elevate, avoiding the far-fetched farce and convoluted circumstances we might be expecting given the material. There’s a temptation to overload teen comedies with too much extraneous plot but Wu’s film is mercifully streamlined as she avoids adding in, say, a mean girl adversary or any inconsequential parental subplots, focusing on the triangle and little else.

Ever since Love, Simon’s respectable box office numbers showed that, shock, queer teens crave experiences similar to their own to be reflected in the same glossy way as their straight peers, we’ve seen more LGBT representation in high school movies. It’s predictably slow progress but The Half of It is another sensitively crafted step in the right direction, deftly conveying the difficult unsureness that can accompany same-sex attraction at a young age. The characters work their feelings out in ways that are messy and confusing which does leave some of the last act feeling similarly messy and confusing, with Wu wrapping things up a little too abruptly, missing a few emotional beats and leaving a few unanswered questions. Religion hovers over the film (Ellie plays piano at the church but doesn’t believe while Paul and Aster attend and do believe) but Wu can’t seem to find a reason why, with some late in the day attempts to make a connection falling flat, especially with regards to how some of the characters view homosexuality, and the insertion of the church ultimately feels like one of the few elements in the film that could have been easily excised.

But what keeps the film mostly on track, even in its scrappier moments, is its central trio of accomplished young actors, who’ll probably see a substantive, and deserved, uptick in both career choices and Instagram followers after this lands. The real find is Lewis, who meters out hidden strength behind a meek demeanour, refusing to turn her character into a stock geek. Her husky voice is eerily reminiscent of Jennifer Lawrence and she shares a similar on-screen confidence at a young age, one I look forward to seeing more of in the future. There’s magnetic chemistry, both romantic and platonic (Wu’s focus on the importance of friendship makes for a nice change), between the three characters and even when the formula is at its most predictable, they manage to smoothly paper over any cracks.

Like last November’s surprisingly efficient comedy Let It Snow, The Half of It is a strong, warm-hearted and quietly progressive addition to the expanding Netflix teen movie pack which treats its target audience with the respect they deserve.