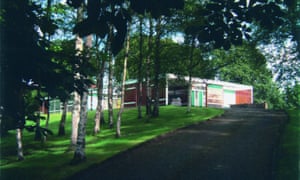 When Shelley Klein moved back in with her father Beri after her mother died, she brought some old furniture with her. He didn’t want it in the house: a Victorian chair would compromise the modernist vernacular, he said. He objected to her pots of herbs, too: putting them on the kitchen windowsill would ruin the rectangular symmetry. They’d had these arguments since childhood, when he stopped her having a Christmas tree. To Beri, the house was a work of art, a gallery for living in, and nothing must detract from its aesthetic.

Designed by the architect Peter Womersley, who became a close family friend, High Sunderland sits in a pine forest on the Scottish borders. A single-storey series of interconnecting boxes, its defining feature is a generous use of glass, which seems to draw the surrounding landscape inside. Klein was born there in 1963, a few years after it was built. She feels “hefted” to the place and used to dread leaving it as a child. Despite travelling widely and spending years in Cornwall, she kept returning, even before her father’s last years. Her book is a homage to the house – and to him.

She arranges it like a floor plan, taking us through it room by room: from the hallway, with its single piece of furniture, a Danish chair on which it was forbidden to sit or place coats, through the living room, “as clean and well lit a space as a Nordic snowscape”, to the kitchen, where her parents would argue how long roast beef should be cooked. She also shows us the garden, which to Beri’s annoyance was sometimes disfigured by molehills, which interrupted the flow of the lawns. Photos are included but this isn’t a coffee table book for interior design buffs. Each room has particular memories for Klein. And her journey through them is also a psychological quest, an attempt to understand how the house shaped her personality and whether she can ever get free of her attachment.

She couldn’t wear a Laura Ashley dress without him mocking her: ‘You look like the inside of a Victorian toilet’

Her father’s strict orthodox Jewish upbringing in Yugoslavia might have led him to become a rabbi – but then disenchantment set in during his religious studies in Jerusalem. A place at art school kept him safe there during the war, unlike his relatives murdered in Auschwitz. In 1945 he came to Leeds to study textile design, where he met his wife to be, Peggy. He felt like an alien, “paprika in a large British stew”, but being an outsider didn’t hold him back. Having set up several mills in Scotland, he made fabrics for Chanel, Dior and Yves Saint Laurent. The house played its part in his success, hosting fashion shows and photography sessions “with models striking poses against the Mondrian-style exteriors”.

High Sunderland has no attic, no cellar and very few doors. A house without secrets or ghosts, a museum of rationalism, with everything out in the open: such was the intention. Reacting against the transparency, the young Shelley aspired to be “opaque, clouded, un-see-able through” – or at least to have a door on her bedroom. Keeping things from Beri made her feel guilty but it was the only way not to be overwhelmed. Later she discovered that Peggy had a few secrets too, including a set of sherry glasses, hidden in the back of a wardrobe because their design and antiquity would have offended him. The memoir is suffused with grief at his death but honest about how exasperating he could be. The teenage Shelley couldn’t even wear a Laura Ashley dress without him mocking her (“You look like the inside of a Victorian toilet”). Their arguments and banter, set out like dialogue in a playscript, are often hilarious.

It’s a reviewer’s cliche to say of a book that the main protagonist isn’t any of the characters but the place where it’s set. Here no such distinction can be drawn: “My father was the house. The house was my father,” Klein writes. Her dilemma, when he was alive, was finding room to be herself. As she realises when they are rowing over her having a puppy (“The house isn’t big enough,” he tells her), High Sunderland was too small for anyone else because it was “fully occupied. By him”. Her dilemma, now he’s gone, is whether she can bear to sell up. She had too good a start in life, a friend tells her, and she agrees: she has idealised her childhood, her father and the house “so that nothing else compares”. By the end she has worked out what to do. But it’s a difficult process, and this original, moving and bracingly honest book doesn’t hide the pain of separation.