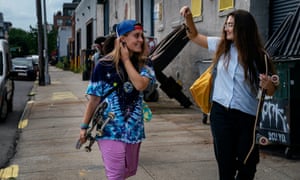 Betty, HBO’s six-part series about a group of female skateboarders, started with a fortuitous subway ride. A few years ago, the show’s creator, Crystal Moselle, a documentarian best known for The Wolf Pack, overheard two skater girls, Nina Moran and Rachelle Vinberg, on the G train in Brooklyn. Transfixed by their style, skateboards and Moran’s story of making out with a girl nicknamed “glitter tits”, Moselle approached them on the platform for an ad campaign. She later cast the untrained actors and several of their friends as fictional versions of themselves in Skate Kitchen, her loose, atmospheric film about a lonely suburban girl, Camille (Vinberg), blossoming in the friends’ all-female skateboarding collective of the same name.

Betty, co-produced and written with Lesley Arfin (Netflix’s Love) and Patricia Breen, spins off from this absorbing world, a subculture gliding beneath New York’s expressways and through its tourist-saturated parks. It’s an even looser, more furtive version of the film, a beautifully shot extended hang with the same characters, though on an alternative timeline, with the sheerest of cable television gloss – organic inclusions of iPhones, Instagram DMs and “fuck yeah, dudes”, of joints passed around the back of a van, captured with a film-maker’s eye for emotion.

Moselle, who co-wrote, directed and executive-produced the series, is by now an expert in this world, and Betty is immediately engrossing despite a wariness of the signposting common in many half-hour television series. The story doesn’t so much kickstart as, like a ranging summer afternoon with friends, spitball forward into a shape more distinctive for its momentum – flirtations observed in line at a Bushwick bar, tension clear in an aborted run for Boba tea – than its resolutions. In this version, Kirt (Moran), the group’s laidback leader, cuts through downtown Manhattan on her board, a jug of Arizona iced tea in one hand and her phone, FaceTiming her best friend, Janay (Dede Lovelace), in the other. The two are bound for the skate park, where they’re hosting a girls’ “skate sesh” advertised on Instagram. There they meet Honeybear (Kabrina “Moonbear” Adams), an enigmatic skater from Staten Island who lets her style – mismatched sneakers, open vest over nipple pasties, camera always in hand – talk for her; Camille (Vinberg), a placid-faced, long-haired shredder who’s apathetic when it comes to female solidarity (she’s in with the boys); and Indigo (Ajani Russell), a Rihanna lookalike who deals weed with an acquaintance of the group.

The shades beneath these at first glancingly presented personalities develop like Polaroids, in unstilted conversations as the summer days spill on (the episodes take place over a few weeks in the summer of 2019). The story unfurls underhandedly, with the ebb and flow of a tide; seemingly off-hand comments – Camille forgot her backpack at the park, oh shoot, her friend’s wallet is in there, maybe try “Find My iPhone”? – become narrative arcs for whole episodes. The effect feels similar, I’d imagine, to Moselle’s experience on the train: observing a colorful conversation, and somehow following it through the next several hangs. 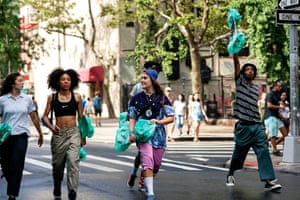 Still, Betty does advance stories that are gripping in their believable un-sensationalism – a kaleidoscope of experiences for young women in New York that doesn’t feel too overtly “girl power”. (Guys’ dismissal of girls with boards does, however, course throughout the series.) Indigo’s drug deal hijinks become a referendum on friendship and forming her own ethical boundaries; Honeybear’s timid wade into dating another female skater, Ash, reveals a person outwardly bold in style but privately circumscribed by anxiety. Kirt’s relentlessly mellow, karmic vibe – unless she’s defending her friends with immediate punches thrown – struggles under the weight of necessary apologies. Camille leans into her attraction to Bambi (Edmund Donovan), a skater veteran and “clip” maker; Vinberg is especially strong in tracing the intoxicating burn and cold shadow of attention, and the belief that, as a woman, you’re being taken seriously. Janay grapples with a disturbing revelation about her best friend and YouTube show partner, a #MeToo storyline that Betty handles delicately without resorting to emotional gimmicks.

The series, like Skate Kitchen, features beautifully propulsive sequences of skateboarding across New York, but shines brightest in its most stripped-down, documentary-adjacent moments of mundane girl talk: which strips to wax your pubic hair? What tricks do you use to not respond to a fuckboy’s texts? What didn’t you know when you were harassed, or assaulted, or belittled that time in the past, and how do you convince yourself it wasn’t your fault? These conversations, culled from real life, the type that really blur the line between acting and observing fully formed characters in their natural habitats, expand on the movie and offer an immersive, cathartic hangout.

Betty, to its credit, understands that some of the most formative, generative moments in young women’s lives come from just hanging out, talking about today. Watching the series, with its characters all up in each other’s jumbled limbs and business in a bustling city, in this shutdown, feels like a dream; I suspect the pull of a world that is realistic, but just a coat of gloss removed from ours, will hit harder now than ever.