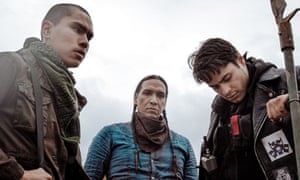 Given how movies about the undead refuse to die, a tweak on what’s become a decaying formula is always a welcome surprise, especially if said tweak involves a little more than “what about zombies but strippers”. Back in the 60s, and at rare times since, the zombie subgenre has been used as a way of sneaking social commentary into horror, the set-up of an invading force destroying a community allowing for a range of sly metaphors.

In Blood Quantum, a grim Canadian B-move that drew praise at last year’s Toronto film festival, writer-director Jeff Barnaby tells a familiar tale through the eyes of an indigenous community in the early 80s. In the film’s opening stretch, we see the Mi’kmaq people of Red Crow grapple with a gruesome outbreak before events leap forward six months and we see how their lives have then radically changed. The nifty twist here is that those who are First Nation residents are immune while the white people around them are not. Barnaby’s colonialist take on the formula is far from subtle, and at times a little too bluntly on the nose, but he’s a film-maker with both something to say and the skillset to say it in a distinctive way, offering up an initially engaging alternative to mere guts and shock tactics.

That’s not to say it isn’t also filled with plenty of guts. In an attention-grabbing first scene, we see a fisherman finding his gutted catch of the day coming back to life and Barnaby proceeds to escalate events with a sharp and, in one brutal pregnancy scene, horrible eye, which makes it a slight disappointment that soon in, we skip to a post-apocalyptic wasteland reminiscent of a low-budget teen show. The central human drama revolves around a fractured family dynamic: sheriff Traylor (Michael Greyeyes), his ex-girlfriend Joss (Elle-Máijá Tailfeathers), their son Joseph (Forrest Goodluck) and Traylor’s wayward son from a previous relationship Lysol (Kiowa Gordon).

The fragile new community that’s been created is made up of the immune Native residents and others who they have saved. The decision to bring in white people causes tension, especially with Lysol, and the film wrestles with an interesting dilemma, at least for a while. A community who have been diminished and abused are now back in control of the land that was always theirs and they must decide how to treat the outsiders and what dangers they’re willing to risk. There’s also a nicely etched, if underpowered, tension between a son who resembles his father before he reformed himself and a son who resembles his father’s newer self, with both sides wrestling for dominance, both mentally and physically.

As one might expect, things soon devolve into chaos but Barnaby’s pacing isn’t always as well-modulated as it is in the film’s first 20 or so minutes. When it gets frantic, he can’t quite muster up any genuine suspense and so relies instead on extreme gore. He does have an impressive knack for it, managing to construct a number of inventively nasty moments, but without much tension, the impact isn’t particularly long-lasting. Performances are also mostly underwhelming and so the family conflict doesn’t cut quite deep enough, making last act stabs at emotional resonance a tad far-fetched. It’s best taken as a violent slab of late-night exploitation, made notable by a powerful conceit and some evocative visuals. It’s just a shame that the execution can’t quite catch up with the premise.