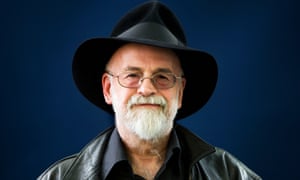 On what would have been the late Discworld creator’s 72nd birthday, Terry Pratchett’s production company Narrativia has announced a new development deal to create “truly authentic … prestige adaptations that remain absolutely faithful to [his] original, unique genius”.

The deal will see Motive Pictures and Endeavor Content team up with Narrativia, which Pratchett launched in 2012, to make several series adaptations of the late author’s fantasy novels. There are currently no details of which books the partnership will tackle, though many of Pratchett’s books have been adapted before: Sky has dramatised Hogfather, The Colour of Magic and Going Postal; Soul Music and Wyrd Sisters have been turned into animations, and Good Omens, starring David Tennant as the demon Crowley and Michael Sheen as the angel Aziraphale, was recently aired on Amazon Prime and the BBC, to positive reviews.

“The spirit of this new alliance has been forged from a shared love of the source material and a commitment to create an epic series, which will kick off with some of the most iconic titles in Sir Terry’s fiercely incisive and satirical universe,” they said.

Pratchett’s daughter Rhianna, a co-director of Narrativia, said on Tuesday that Motive and Endeavor Content “perfectly share our vision” of what a Discworld screen adaptation should be.

“Discworld teems with unique characters, witty narrative and incredible literary tropes, and we feel these should be realised on screen in a form that my father would be proud of,” she said.

“The Discworld books are a huge source of joy to millions of readers, and rightly so; every paragraph, phrase and footnote was crafted with brilliance and flair and we are committed to bringing Terry’s world to the screen with the respect and care it deserves,” he said.

Early photos of BBC America’s forthcoming series The Watch, based on Pratchett’s novels about the City Watch police recently prompted concern among fans due to its drastically different cyberpunk aesthetic. Although Rhianna, and Pratchett’s friend and assistant Rob Wilkins, did not comment directly on the adaptation when the photos were revealed, they both showed their displeasure by sharing a blistering article by Ursula K Le Guin in which she criticised an adaptation of her own Earthsea books.

Wilkins denied the new deal was in response to Narrativia’s dissatisfaction with The Watch. “Though Narrativia retain an executive producer credit in The Watch, they have no creative involvement in the project. However, they of course wish The Watch all the best.”

Motive Pictures chief executive Simon Maxwell called the Discworld universe a national treasure. “Together we will produce shows that will be loved by millions of Discworld fans worldwide, whilst also opening up Sir Terry Pratchett’s epic creations and legacy to new audiences,” he said.