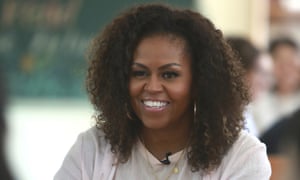 Michelle Obama called Nadia Hallgren, who directed Becoming, ‘a rare talent, someone whose intelligence and compassion for others comes through in every frame she shoots’.
Photograph: Hau Dinh/AP

Netflix has announced a new original documentary focused on former first lady Michelle Obama to be released on 6 May.

Becoming will follow Obama on her 34-city tour to promote her book of the same name and will offer an “intimate”, “rare and up-close” look at her life. It’s directed by Nadia Hallgren, who recently made the documentary short After Maria, which looked at the effect of Hurricane Maria on Puerto Rican families.

The Obamas’ first film: will American Factory be the biggest documentary of 2019?

“It’s hard these days to feel grounded or hopeful, but I hope that like me, you’ll find joy and a bit of respite in what Nadia has made,” Obama said in a statement. “Because she’s a rare talent, someone whose intelligence and compassion for others comes through in every frame she shoots. Most importantly, she understands the meaning of community, the power of community, and her work is magically able to depict it.”

Hallgren has spoken about the difficulty of filming someone flanked by Secret Service and that she was forced to film in tight, private spaces that allowed for them to build a close relationship. “I intended on making a film about her current experience – where she is in this moment and the way she’s reflecting on the entirety of her life, not just her years in the White House,” she said in a statement.

Obama’s memoir Becoming became an instant bestseller upon release in 2018 and has since sold over 10m copies. According to Gallup polling, Obama was voted the most admired woman in the US for the last two years. When recently asked about her suitability as vice-president, the presumptive Democratic presidential candidate, Joe Biden, said he would pick her “in a heartbeat”.

The film marks the latest collaboration between the Obamas and Netflix after the couple signed a production deal with the streaming giant in 2019. They recently exec-produced the Oscar-nominated documentary American Factory and have a number of projects on the way, including a drama series called Bloom set in the world of fashion in postwar New York.

The surprise launch of Becoming next month arrives soon after Hulu’s four-part docuseries Hillary which told the story of Hillary Clinton. It picked up mostly positive reviews with the Guardian’s Peter Bradshaw calling it “sympathetic and respectful”.