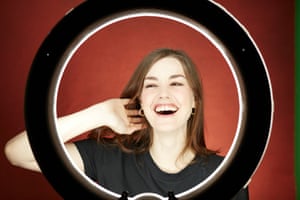 On the verge of giving up … Laurie Nunn, creator of the Netflix hit.
Photograph: David Levene/The Guardian

Laurie Nunn is remembering her own experience of sex education. It was, she says, “practically nonexistent” at her school, which is ironic, given that she is responsible for one of the most candid TV shows ever made about the subject. “They didn’t talk about female pleasure at all,” says the writer. “I’m in my 30s and I feel like I’m only now starting to get the right language to talk about my own body. I think, ‘God, I wish I’d known this stuff when I was in my 20s.’”

When Sex Education was picked up, Nunn had no big credits to her name. She had written and directed a couple of short films and had worked up ideas for production companies, but nothing had quite landed. Then, suddenly, she had a hit – such a hit that Netflix’s UK headquarters now has a Sex Education-themed floor. (We meet on the Stranger Things floor, though. Perhaps the Sex Education floor would have been just too weird.)

We spoke just before lockdown, and just before the third season was officially announced – and the world’s loudest “Duh” echoed around the internet. The second season only arrived in January, but Nunn had actually started writing the third last October – not because she was being presumptuous, she insists, but because knocking out a season a year means being very organised. Plus, she left season two on an unbearable cliffhanger. “I’ve been getting a lot of angry Instagram messages from 14-year-olds,” Nunn says with a laugh, then quickly catches herself. “Who probably shouldn’t be watching the show.”

Sex Education, officially an 18 certificate, came from a “seed” idea, a one-liner floated by a production company that writers then flesh out into a pitch. “It was basically: what would happen if we put a teenage sex therapist on to a school campus?” The idea captivated her. “I pitched really hard. I sent them photographs of myself as a teenager. I was the biggest dork in the world. I had braces, teeth, glasses. It was bad.” 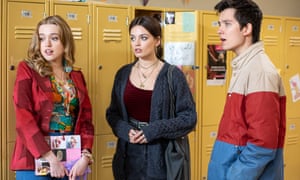 Nunn wrote a pilot, but the production company, Eleven, couldn’t find a home for it. The project was thought to be dead. Then Netflix came across it and Nunn and Eleven pushed again. “We created a bible of what I wanted to do visually.” She still has the document. “It had images of teen films and TV shows we loved: Freaks and Geeks, 10 Things I Hate About You, a lot of John Hughes. Then we paid someone to draw all these graffiti penises over it.” She laughs. “We actually had to go back and forth and say, ‘Can you make that penis a bit smaller? And make that one have less semen?’” Less semen clearly did the trick. Netflix said yes.

Although filmed in Wales, and set in the fictional town of Moordale, the show’s aesthetic is quite dreamlike and much indebted to US high-school movies, from its bright colours to its cliques. Some UK viewers called out the first season for aspiring to American teen life, rather than gritty British realism. Did that come as a surprise? “I think it did, yeah,” says Nunn, who has a bit of an Australian twang. She was born in London and moved to Australia after her parents’ marriage ended. Relocating to another country at the age of 14 may explain why the show feels untethered to one country or experience.

“It felt quite clear to me that we’d made a creative choice. So when that narrative started – that we’d done it to win over an American audience – I found it baffling. The pitch of the show is so heightened. It’s about this kid who gives out sex advice in the toilet cubicle. It needed a really heightened world to match it. Moordale’s not a real place: it’s almost like a comic book, a teenage utopia.”

The frankness about sex was there at the start. “That was the only way I could do it, because it’s really awkward, writing sex scenes. It’s why they have that Bad Sex award! I remember trying to write it in a flowery way, and just going, ‘This is so …’” She cringes. “You just have to be like, ‘What is it?’ And write that.” 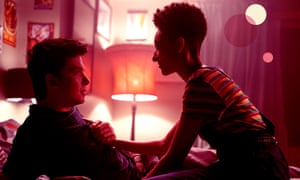 ‘Nobody is going to be touched anywhere they’re not prepared for’ … Otis and girlfriend Ola. Composite: Guardian/Netflix

The show has an “intimacy coordinator” called Ita O’Brien, who choreographs more explicit scenes. “Nobody is going to be touched anywhere they’re not prepared for. Everyone can speak up in a very open and safe way. I think a lot of the actors have felt empowered by that. It’s made them feel they can be braver in those scenes, because they have that back-up.”

In Melbourne, she did a degree in film, then returned to Britain for an MA in screenwriting, where she picked up an agent. “Having family in the arts made me feel, from a very young age, like that was an option for me,” she says. Her mother is the Australian actor Sharon Lee-Hill; her father the British theatre director Trevor Nunn. “I’ve got friends who are in the arts whose family aren’t, and it feels like more of a scary prospect. They definitely encouraged me to follow my passions.”

The fact that Sex Education is Nunn’s debut series is extraordinary, given its impact – even more so because she was on the verge of giving up writing. “I’d had a lot of stuff in development, but I had never got anything to a green light. I was 30 and really thinking about retraining.” She actually considered becoming a therapist. “It sounds so cringe, because of what the show is about. But I was really lucky this happened.” 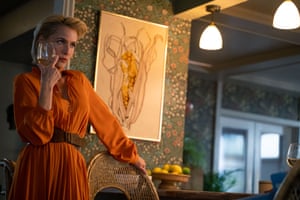 ‘The parents are as messed up as the kids’ … Gillian Anderson as Jean, the sex therapist mother of Otis. Photograph: Netflix

The way it happened, and the fact that it has been such a smash, means Nunn now has little time for anything else. “At the moment, Sex Education is my main focus, because I just live in the brains of those characters.” She laughs. “Not very healthy.”

One of the highlights of season two was a shift in focus, to include the adults more. In one delightful subplot, Samantha Spiro, who plays the headmaster’s wife, rediscovers her sexual desire. “After series one, it was lovely to realise that lots of people from all age groups were enjoying the show.”

This may have been due to the presence of Jean, the mother of Otis the teenage sex therapist. Jean is an actual sex therapist, perfectly played by Gillian Anderson. “But in series two,” continues Nunn, “I wanted to go deeper into the adult characters. The parents are as messed up as the kids. I really believe we don’t change very much from when we’re 17.”

As well as adult explorations, teenage longings, and a hilarious school production of Romeo and Juliet that turns the play into a sex-positive sci-fi musical, one of the breakout storylines of season two involved Aimee, the show’s sweetest character, who is sexually assaulted on a bus, leaving her quietly traumatised. Nunn says it’s the story she’s had the most feedback about, by some margin. 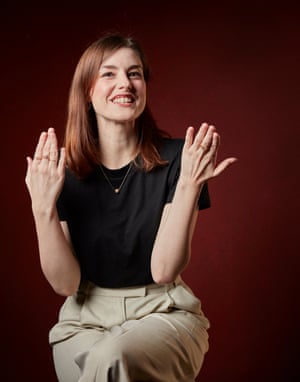 ‘I was the biggest dork in the world’ … Laurie Nunn. Photograph: David Levene/The Guardian

“That came from something personal that happened to me in my late-20s, but had taken a toll on my mental health. Basically, a similar thing happened to me on my local bus, and it made me feel very unsafe in my environment.” When she was writing season two, she was thinking about the #MeToo movement. “And then thinking about other things that had happened in my life, and that one thing on the bus – why did that affect me so much, compared with other things?”

Aimee was perfect, says Nunn, because she is so sunny and trusting: her loss of innocence is heartbreaking. “What I really wanted to explore was, ‘Hang on, when I walk home, why am I carrying my keys in my hand like I’m ready to stab someone?’ Who taught me to do that? Why am I always afraid when somebody’s walking too close behind me? Or, you know, when you get on the tube, and you look around, and you think, ‘Who shall I sit next to? What’s the safest space?’ And we just do this. It’s instinct.”

Is she hoping that male viewers will learn from that story? “Yeah. Women have always known this stuff. We’ve brought it to the surface now and we’re saying, ‘OK men, look at it, think about it, deal with it.’”

At the beginning, they considered gender-flipping the lead, having a girl as the sex therapist, rather than “the straight white geeky virgin” Otis. But Nunn found it less interesting to write. “I’m making a generalisation, but girls are probably better at talking about sex. And I really wanted his friendship with Eric to feel like an antidote to some bromance storylines we’ve seen in the past. They take the piss, but they also love each other, and accept each other for their differences, and are able to be vulnerable with each other. We don’t see that with male characters enough.”

Plus in Maeve – the Bikini Kill-loving, Virginia Woolf-reading tough best friend – there’s plenty of cool-girl fodder. I wonder if, in those teenage photos she used in the pitch, Nunn was a Maeve? “Oh God no,” she grins. “No, I wish. But I’m Otis, 100%.”