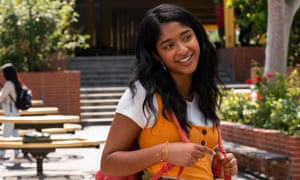 Maitreyi Ramakrishnan in Never Have I Ever, a show that offers a moving and original portrait of a teenage girl grappling with grief.
Photograph: Lara Solanki/Netflix

It’s the first day of sophomore year, and 15-year-old Devi (Maitreyi Ramakrishnan) kneels in front of the Hindu shrine (and her blessed geometry textbook) in her home in Sherman Oaks, California. She has some requests, the profound goals of many high school girls: be cool, get hot, snag a boy. Or, as Devi spins at the start of this uneven but endearing 10-part teen entry from executive producer Mindy Kaling, she wishes her arms no longer “looked like the floor of a frickin’ barber shop”. Most importantly, she craves a boyfriend, but “not some nerd from one of my AP classes,” she says with Booksmart-style conviction. Said boy “can be dumb – I don’t care. I just want him to be a stone-cold hottie who could rock me all night long.”

Devi is, needless to say, a virgin, and also an intelligent firebrand with a seemingly effortless command of power-points, witty barbs and topical-enough pop culture references (“Yeah, but he has a hot face. You’ll be like Zayn and Gigi,” she tells her friend as a boyfriend sales pitch). She’s also a master deflector, reeling, with a John McEnroe-style short fuse, from a massive loss. (McEnroe, for no reason seemingly beyond the fact they could get him, narrates the series.) “As you know,” she half-prays, “last year sucked for a number of reasons.” As abruptly revealed in what seems like a first-episode bit but is not, her beloved father – a sunny, unbridled presence in sepia flashbacks and dream sequences, and Devi’s only true best friend – died of a heart attack at her orchestra concert the year prior. The shock paralyzed her for three months (teenagers: not forgiving of the concept “psychosomatic”), forcing her to use a wheelchair. Only the sight of her crush, swim-team boy and said stone-cold hottie Paxton Hall-Yoshida (Darren Barnet) – a layered mystery or stock jock character, depending on the scene – and the promise of a “rebrand” in sophomore year, zaps Devi back on her feet.

The first few episodes are clunky, as Devi, in denial-steeled striver mode, directs or antagonizes characters seemingly identified by one joke: her cousin Kamala (Richa Moorjani), the beautiful “good Indian” doctorate student at CalTech, wide-eyed with America and preparing for arranged marriage; insult-throwing academic rival and rich kid Ben (Jaren Lewison). Checklist in hand, she directs her two best friends, Eleanor (Ramona Young) and Fabiola (Lee Rodriguez), into cool-adjacent boyfriends and a 10-step popularity plan. The show, which shares an aesthetic (and glittery, Spotify-ready pop soundtrack) with Netflix’s teen staple To All The Boys I’ve Loved Before, takes a swift and mostly tacit approach to diversity in its young cast; classmates have designated the trio of Devi, south-east Asian Eleanor and Afro-Latina Fabiola as “the UN”, and the makeup of Sherman Oaks High is refreshingly and conspicuously not just white, cis, able-bodied. But for most other than Devi, this goes unmentioned; the philosophy for the characters and, it appears, the show, is to attain the long-sought ideal of being “just a normal teenager” and expanding who gets to claim such a distinction.

The main force for this is Devi, who recoils at the stereotypically strict immigrant parenting of her mother (an excellent Poorna Jagannathan), dismisses Indian culture and dreams of running away. In the season’s first half, she seesaws from deeply insecure to fearless – the plot launches as she writes a checklist for her best friends’ “rebrand” and, in a viscerally cringe-y scene, directly approaches Paxton, introduces herself, and asks if he would have sex with her (and, when this works, gushes “We’ll circle back about it!”). 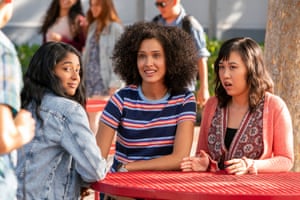 It is refreshing, and exciting, to see someone like Devi given the Fleabag treatment: space to avoid grief by misbehaving, an exploration of the bitter pills of growing up with a darkly comic touch. But in its early episodes Never Have I Ever applies the evidence of Devi’s assholery – soliciting of Paxton, lying repeatedly to her friends, never listening – too thick. It’s welcome to see an insolent Indian American star, which Never Have I Ever shares with Kaling predecessor The Mindy Project, self-sabotage with candor. But like the former show, it can also be grating. It’s not until the show’s later episodes, when it raises the emotional stakes for everyone – depicting Ben’s lonely home life, contextualizing Fabiola and Eleanor’s one-notes as “robot nerd” and “drama geek”, playing with the eternally gutting story that is getting stood up – that the jokes start to pack a punch.

Ramakrishnan, a newcomer discovered through a global casting search, shows her inexperience here and there, but shines in the series’ more emotionally demanding scenes; her rawness in the final episode moved me to tears. Which is evidence that, though not a perfect ride and likely to be overhyped out of starvation mode for any teen comedy resembling the actual diversity, horniness, and profanity of being a teenage girl, Never Have I Ever gets there, eventually. The series’ back half settles into a storyline balancing emotional depth with outbursts, and what emerges is a moving and original portrait of a teenage girl grappling with grief. It’s a bummer that it couldn’t have arrived at this version faster but, as Devi and the show learn, there’s ultimately satisfaction in ditching the attention grabs and finding your stride.