If It Bleeds review – Stephen King on vintage form 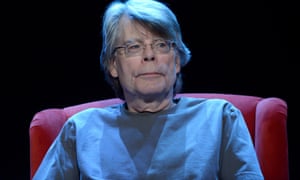 Stephen King has made good use of the sometimes tricky novella form over his nearly 50-year career, often as a vehicle to explore ideas and styles that lie off the more familiar path of his horror novels. If It Bleeds brings together four new stories, all offering vintage King themes with their own particular twist.

The showpiece here is the title novella, a sequel of sorts to King’s 2018 novel The Outsider, which was shown as a 10-part HBO series at the beginning of this year. The title comes from the callous (but accurate) newsroom axiom “if it bleeds, it leads”. Private investigator Holly Gibney is watching breaking news coverage of a bomb attack at a middle school when she notices something odd about the reporter, Chet Ondowsky. A little background research suggests that Ondowsky’s being first on the scene at incidents of horrific carnage is no coincidence, and Holly wonders if the reporter might be deliberately causing atrocities. King marries an obvious affection for the tropes of old gumshoe movies with carefully researched forensic technology to create an odd hybrid of procedural and horror that ratchets up the suspense, even if it feels a little familiar to readers of The Outsider, or the trilogy of Bill Hodges novels in which Holly first appeared.

Mr Harrigan’s Phone is set in classic King territory, with all the gothic ingredients of retribution from beyond the grave, Old Testament justice and the author’s fascination with the ways in which technology can mimic – or be exploited by – supernatural forces, a literal “ghost in the machine”. It’s a straightforward story in which wrongdoers are punished and kindness rewarded, and as such not especially scary – except that this is the point, made with King’s characteristic sly wit. The ghost here is a deliberate misdirection; the truly terrifying element of the story, the one with the power to unleash all manner of horror into our lives, is not the corpse rotting in its grave, but the shiny little gadget with the Apple logo in our pockets.

Stephen King: ‘I have outlived most of my critics. It gives me great pleasure’

The strangest novella, and perhaps the least coherent, is also the most beautiful, in its curious way. The Life of Chuck is three separate stories linked to tell the biography of Charles Krantz in reverse, beginning with his death from a brain tumour at 39 and ending with his childhood in a supposedly haunted house. Though the first and third acts rely heavily on fantasy and the supernatural, it’s the middle part that stands out because of its entirely human tenderness. Chuck, an unremarkable accountant not yet aware that “the seeds of his end … have lately begun to awaken”, finds himself walking down a street in Boston when a busker’s tune takes him back to high school days and he begins to dance, a spontaneous, joyful expression of a part of himself he thought forgotten. King describes this little contagious outburst of happiness with such understated empathy for the multitudes we all contain that this part of the story could easily stand alone, and would even be the more powerful for it.

Rat, the final novella, also returns to familiar ground. Drew Larson is an author – not, alas, a very successful one, but plagued with an array of writerly tics and foibles that King depicts with an insider’s comic knowledge. “When he came home, Lucy took one look at him and said, ‘You’re either coming down with something or you’ve had an idea.’”

But, as any King fan knows, a struggling writer cut off in the backwoods may soon find his tics turning into full-blown madness, and Drew – trapped by a storm and in the grip of a fever – encounters a rat that talks to him in the slightly pompous voice of Jonathan Franzen. It’s a wry variation on the Faustian bargain trope and although it strikes a more lighthearted note to end on, Rat is asking timely questions about the price we’re willing to pay for personal success, and whether an old, sick person’s life is worth less than that of someone younger. King, as always, is right on the money.