The Rolling Stones release Living In a Ghost Town, first original music since 2012 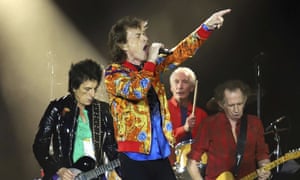 The Rolling Stones have released their first original music since 2012, a new – and rather apocalyptic – single called Living in a Ghost Town.

Mick Jagger said the band were “recording some new material before the lockdown and there was one song we thought would resonate through the times that we’re living in right now. We’ve worked on it in isolation. And here it is.”

Keith Richards said: “We cut this track well over a year ago in LA for a new album, an ongoing thing, and then shit hit the fan. Mick and I decided this one really needed to go to work right now and so here you have it.”

A moody, typically strutting track, its lyrics seem to reference the coronavirus crisis, in the lines: “Life was so beautiful / Then we all got locked down … Please let this be over / Stuck in a world without end.”

Elsewhere, Jagger sings of chaos (“Glasses were all smashing / Trumpets were all screaming”) and societal collapse:

Preachers were all preaching
Charities beseeching
Politicians dealing
Thieves were happy stealing
Widows were all weeping
There’s no beds left for us to sleep in
Always had the feeling
It would all come tumbling down.

Last Sunday, the isolated band performed together You Can’t Always Get What You Want via four separate video links for One World: Together at Home, a concert to benefit charities and the World Health Organisation, co-organised by Lady Gaga. A 79-song album version of the eight-hour event has since been released. 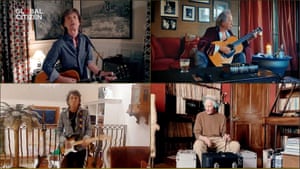 The Rolling Stones performing in the charity event One World: Together at Home. Photograph: Getty Images for Global Citizen

The Rolling Stones’ most recent original material came out as part of the 2012 best-of compilation Grrr!, which featured two new songs: Doom and Gloom, and One More Shot. They have since released an album of blues covers, Blue and Lonesome, in 2016, and another hits compilation, Honk, in 2019. Their last album of original material was 2005’s A Bigger Bang.

The quartet are approaching the milestone of 60 years in the business, after Jagger and Richards formed the group in 1962.

Despite a combined age of 302, they still frequently perform live, and have toured each year since 2012. Their No Filter tour began in September 2017, with the next leg originally scheduled for north America in early May. The band postponed it due to the coronavirus crisis, apologising and saying they were “hugely disappointed”. Replacement dates have not yet been scheduled.

Speaking in more depth about Living In a Ghost Town to Zane Lowe on Apple Music, Jagger said he originally wrote the song in 10 minutes, but made minor rewrites in the wake of the coronavirus crisis.

He also sympathised with those suffering: “It’s 20 million people lost their jobs completely for something that’s nothing to do with them at all. And also the less money you have, the more worries you have. So for lots of people, it’s really tough. I mean, I have friends and they live in really small apartments in a big city and they don’t have anywhere to go and they’ve lost their job. I’m very, very lucky and I’m very aware how lucky I am, but not everyone’s as lucky as me.”